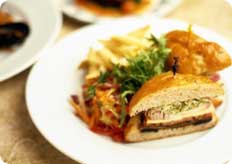 Here are a few examples of typical American dishes and recipes:

American pancakes are thicker and fluffier than their British counterparts or French crêpes. They are usually served at breakfast, in a stack of two or three, topped with butter and/or syrup. Ask for real maple syrup: it's the best! While pancakes are traditionally consumed across the United States and Canada, their origin is probably German, from the traditional Pfannkuchen recipe brought by German immigrants. 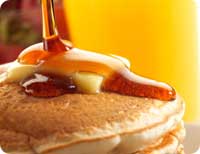 Here is a recipe that is simple to make:

1) Combine the flour, sugar, salt and baking powder in a mixing bowl and form a well in the centre.
2) Separate the egg yolks from the egg whites; beat the egg whites until stiff. Melt the butter.
3) Add 150 ml of milk and the egg yolks to the flour mixture, beating well until smooth.
4) Stir in the remaining 150 ml of milk and the melted butter, and then gently fold in the egg whites.
5) Refrigerate for 30 to 40 minutes.
6) Heat a lightly oiled or buttered frying pan over medium heat. Drop a small scoop of batter on the pan. Flip the pancake as soon as small bubbles appear all over its surface. Serve hot. 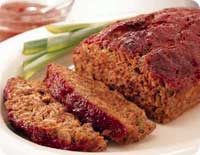 You are likely to find meatloaf on the menu of any small local restaurant, served with mashed potatoes and gravy. Meatloaf is a dish of ground meat that has been combined with other ingredients and formed into the shape of a loaf, then baked or smoked. American meatloaf is usually made with ground beef.  Meatloaf was very popular during the Great Depression (the 1930s), because it offered a nourishing meal at a low cost. To this day it remains one of America's favourite comfort foods.

One of the joys of travelling is discovering dishes not found in one's home country. And when it comes to originality, Americans can certainly hold their own. Here are a few surprising examples of American gastronomy. 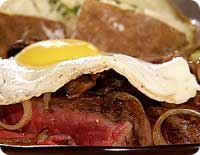 As the name indicates, this dish involves a steak accompanied by one or more eggs. This combination of foods is rather unorthodox, but it is even more surprising to learn that it is eaten at breakfast! It is a good example of the American breakfast philosophy: breakfast is the most important meal of the day and it should be substantial enough to keep you going until lunch. This high-protein combination may have originated with American farmers, who needed a hearty meal before a long day of heavy labour.

You will often find pumpkin pie on the menu, especially if you travel in autumn (September to November). You will be able to enjoy the "local" version of this Halloween and Thanksgiving tradition, anywhere in the country. It is a sweet dessert that is sometimes served with cream.

The recipe originated in New England in 1621, when early American settlers had the idea of filling a hollowed out pumpkin shell with milk, honey and spices and baking it in hot ashes. A more refined version of the recipe involved baking this filling in a pastry shell, giving rise to the pumpkin pie we know today. 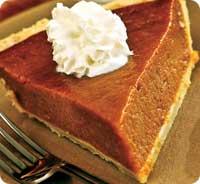 1) Preheat the oven to 180°C.
2) Boil the pumpkin until soft, and then blend into a puree. Set aside.
3) In a mixing bowl, beat the eggs and sugar, add the cinnamon, ginger and nutmeg and mix.
4) Add the pumpkin puree and condensed milk and combine until smooth; pour this mixture into the crust and bake at 180°C for 15 minutes.
5) Reduce the heat to 165°C and cook for another 30 minutes. Let cool to room temperature and refrigerate. Serve with a dollop of whipped cream! 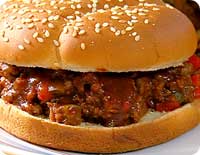 A sloppy joe is a sandwich consisting of ground beef or pork, onions, tomato sauce or ketchup, Worcestershire sauce, and other seasonings, served on a hamburger bun. There is some controversy around the exact origin of this unconventional burger: some say it was invented in the 1930s at Sloppy Joe's Bar in Key West, Florida, while others claim that a cook named Joe first created it in Sioux City, Iowa. Whatever the case may be, if you decide to try one, forget about eating it with your hands and use your fork!

Different regions of the U.S. have their own cuisines and style of cooking, influenced by history, culture, immigration and climate. For example, different foods are grown from north to south and from east to west. You won't have the same culinary experience in New England and the West Coast.

Here are some regional specialties to try during your trip to the U.S.:

You simply must try the clam chowder when you're in Boston! Creamy, hearty New England clam chowder is by far the most popular chowder style, and Boston has some of the best authentic chowder around. The first printed version of the recipe is said to date from the mid-18th century and called for salt pork, onions, potatoes and, or course, clams! A simple dish of chowder was a traditional way to combine ingredients that were inexpensive and easy to find. Even today, it can still be enjoyed in a sourdough bread bowl or in a bowl with crackers. 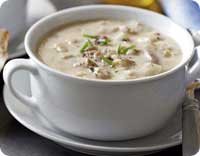 1) Drain the clams, setting aside half of the juice.
2) In a saucepan, brown the bacon in the butter. Add the onion and celery and cook until tender. Add the flour and cook 2 minutes, stirring well. Pour the water, then the clams and the reserved juice into the saucepan, stirring over medium-high heat.
3) Add thyme, bay leaf, corn, potatoes and cream. Simmer gently for 2 to 3 minutes. Add the fish and continue cooking for 2 to 3 minutes. Season with salt and pepper. Serve hot. 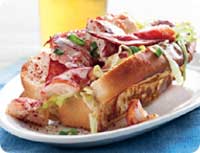 This small sandwich is a must-try if you find yourself in Maine. It can be found on menus everywhere, from small roadside eateries to four-star restaurants. A lobster roll is a mixture fresh lobster meat, chopped cucumber and mayonnaise served in a hotdog bun. And if you like fried food, you will want to try the crab cakes, another New England specialty.

Pork ribs are very popular in American and Asian cuisine. Barbecue pork ribs have a long history in the United States and are a quintessential American food. This messy dish is often called "baby back ribs" (it is sure to be served with a plastic bib and wet wipes to clean your fingers after eating).