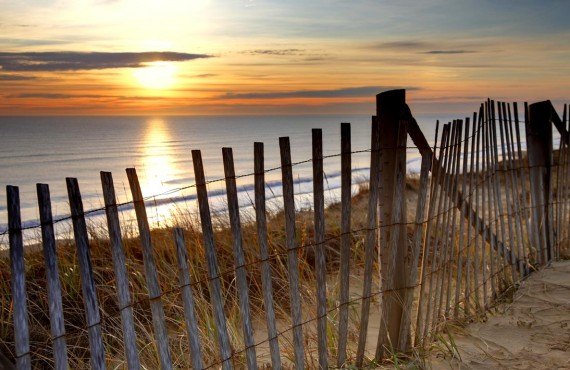 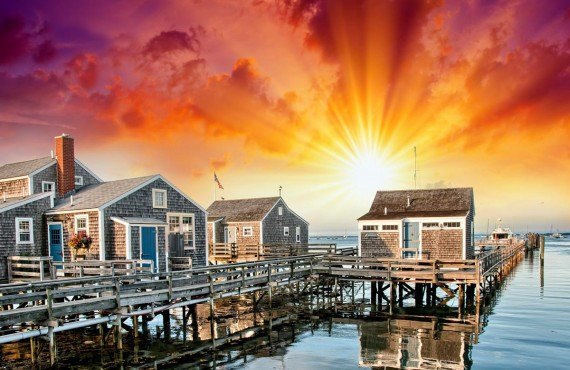 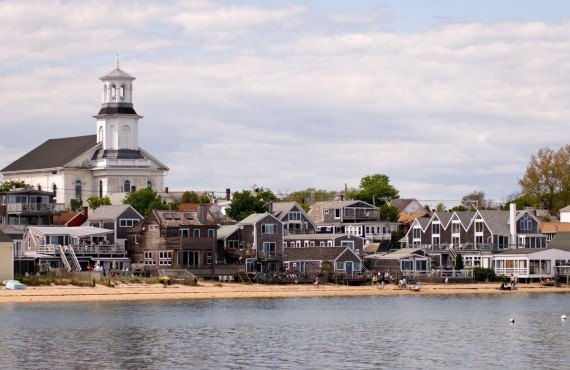 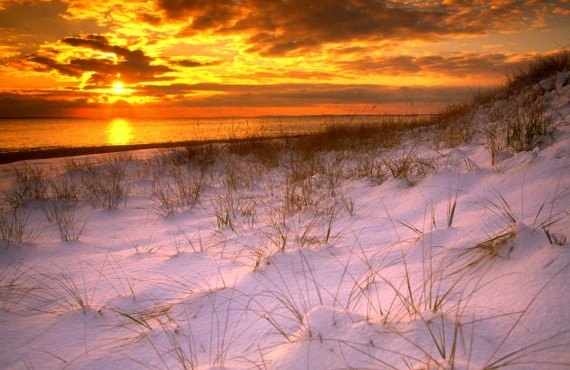 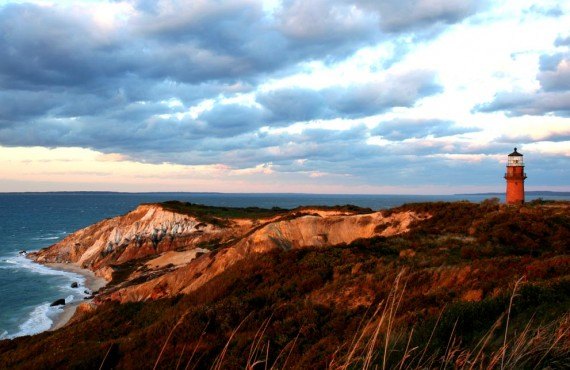 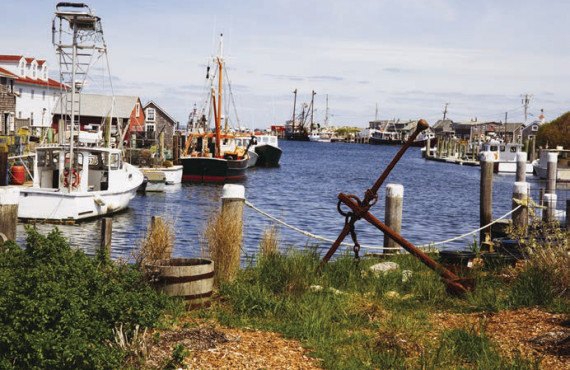 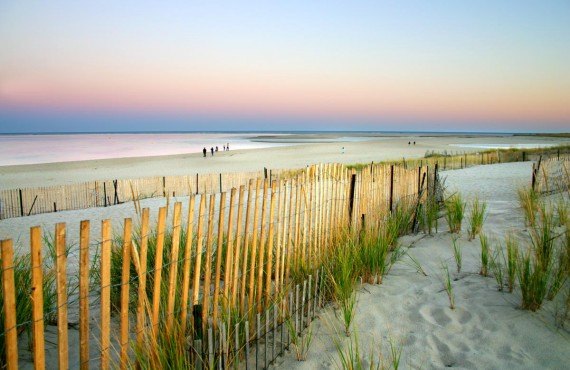 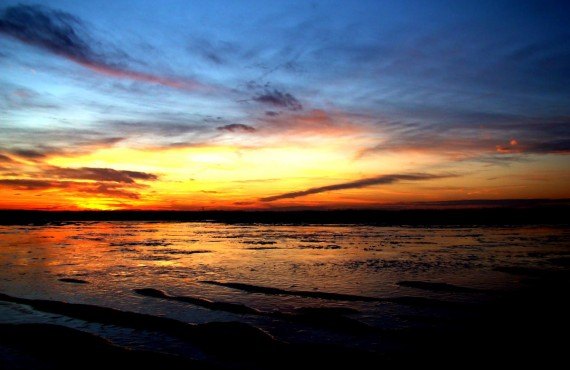 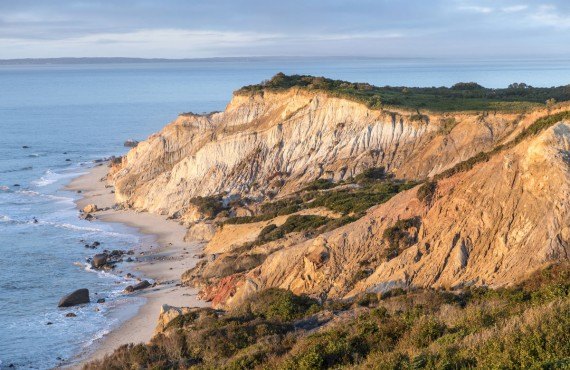 Cape Cod's wild and unique beaches, dotted with lighthouses and dunes, are among the most beautiful on the American east coast.

The art of good living seems to be a way of life on the Cape: gourmet restaurants, small bistros, friendly cafés, fresh produce, good wines and art galleries abound.

Visitors can enjoy many outdoor activities: cycling, swimming, surfing, hiking, kayaking, fishing, wildlife watching, nature walks... There is something for everyone!

Created in 1961 by American president John F. Kennedy, who had a great affection for Cape Cod, the park encompasses sandy beaches, coastal bluffs, majestic lighthouses, marshes, ponds, and a wide diversity of plant and animal life. It stretches nearly 65 km along the coast, and the further you go towards the northern tip of the cape, the more enchanting the scenery becomes.

The most popular beaches include Coast Guard Beach and Nauset Light Beach in the Eastham area, which are perfect for swimming. Marconi Beach near Wellfleet is a well-known surfing spot. In Truro, Longnook Beach is the most spectacular with its high dunes, and Head of the Meadow Beach is also popular, among other things because of its lifeguards. If you are travelling with young children, you will enjoy the calm waters of Corn Hill Beach. In the Provincetown area, choose Herring Cove Beach for its warm water and beautiful sunsets, or Race Point Beach for its long hours of sunshine and the possibility of spotting whales!

Provincetown, at the northern tip of the peninsula, is a popular summer resort town and is known as a vacation destination for the LGBT+ community. Synonymous with partying and freedom, the town bustles with activity, especially in summer. Around its two main streets, Commercial Street and Bradford Street, you will find many restaurants, boutiques, trendy bars, art galleries, and more.

The Pilgrim Monument was dedicated in 1910 to commemorate the first landfall of the Mayflower Pilgrims in Provincetown, an important moment in American history. Since that time, millions of visitors have climbed the 116 steps of this impressive 77-metre monument. The top of the tower offers a panoramic view of the city! Take the time to visit the Provincetown Museum to learn more about the arrival of the Mayflower Pilgrims, the city's rich maritime history, the  early days of modern American theater in Provincetown, and the building of the monument. Open every day from the beginning of April to the end of November, from 9 a.m. to 5 p.m. (until 7 p.m. in high season).

Many marine mammals are found in Cape Cod waters from May to September, including minke whales, finback whales, humpback whales, right whales and dolphins. Provincetown is the best place on the Cape for whale watching. Several companies offer whale watching tours, but Dolphin Fleet is a reliable and popular company associated with the Center for Coastal Studies in Provincetown. Daily departures from MacMillan Pier in summer. Reservations are necessary.

Cape Cod has numerous bicycle paths that allow visitors to explore its dramatic landscapes and quaint villages. The Cape Cod Rail Trail winds through the central part of the Cape, covering a total of 40 km. You can spend a few hours or a full day, with a solo or tandem bike. The most impressive route is the 11-km loop through the Province Lands dunes in Provincetown, at the northern tip of the peninsula. Bicycles can be rented at Ptown Bikes (42 Bradford Street, Provincetown).

Hiking is a popular activity in Cape Cod and there are many trails of varying length and difficulty.

In the Eastham area, the 1.6-km Nauset Marsh Trail is easy and offers beautiful views of Nauset Marsh. In Wellfleet, the Atlantic White Cedar Swamp Trail, a 2.4-km intermediate trail, is a must. In Provincetown, be sure to do the Beach Forest Trail, a 1.6-km loop through beech, pine and oak forest. And of course, many of the region's beaches are perfect for enjoying a lovely walk while taking in the fresh sea air.

From Cape Cod, you can easily take a ferry to the islands of Martha's Vineyard and Nantucket. These two islands are beautiful, but you must have enough time to fully appreciate them.

This island of 15,000 inhabitants, just 6 km off the coast of Cape Cod, is 32 km long. It is famous for its posh inns, chic restaurants and picturesque villages. The Martha's Vineyard State Forest occupies the centre of the island, while numerous ponds, dunes and beautiful beaches are found along the coast.

It is very pleasant to explore the island by bicycle. You can also go there by car if you wish. Pedestrian and bicycle ferries leave from Hyannis, Falmouth and Harwich, and car ferries have regular departures from Woods Hole.

The main tourist towns on the island are Vineyard Haven , Oak Bluffs and Edgartown . And be sure to pay a visit to Menemsha , a charming fishing village that served as a film location for Jaws (as did Edgertown).

You won't want to miss the magnificent Clay Cliffs of Aquinnah , the most photographed spot on the island. The best beaches are East Beach for its tranquility, Joseph Sylvia State Beach which is 4 km long, Katama Beach for surfing, and Moshup Beach for its incredible cliff views.

Nantucket Island, a designated National Historic Landmark since 1966, is 48 km south of Cape Cod and is 24 km long. This picturesque island, with its many cedar shingle houses, wild roses and historic buildings, is easily explored by bicycle. If you really want to take your car, there is a car ferry from Hyannis. But with the large number of tourists, driving can be quite difficult, especially on weekends.

Don't miss the Coskata-Coatue Wildlife Refuge , where you can take a guided over-sand vehicle tours of the largest salt marsh on the island, and the Great Point Lighthouse , the northernmost lighthouse on the island. Madaket Beach is the best spot to watch the sun set, with its big waves rolling in from the open sea. The quaint cobblestone Main Street in historic downtown Nantucket is also a must-see, as is the Whaling Museum , where you can learn about the island's whaling history.

This cupcake shop in Provincetown is known to make the best cupcakes in the world according to some, or at least in the peninsula. Each cupcake sports Scott's signature swirl of pink buttercream frosting. Ridiculously delicious!

Cabot's Candy got its start in 1927, hand-pulling saltwater taffy at small, local fairs. The popularity of this delectable seashore treat led to the opening of a beautiful little store and factory which still operates today. In addition to the classic taffy, this family business also sells fudge, flavoured popcorn and other delicious surprises that will delight young and old alike.

Open daily from noon to 5 p.m.

This seafood eatery is a must in all tourist guides for its fun and friendly New England clam shack experience. The menu offers an array of fresh seafood dishes, grilled, steamed or fried in a variety of ways. The place is so popular that there is a long lineup outside the doors every day. You can bring your own wine.

Open daily from 11:30 a.m. for lunch and dinner, from May 4 until the end of the summer season.

This French bakery is extremely popular, as evidenced by the line of people in the parking lot waiting to enter. The chef is Philippe Rispoli, a native of France. You will find delicious fruit tarts, tasty almond and chocolate croissants and good baguettes, just like in Paris! For lunch, you order at the counter and seat yourself. A taste of France on Cape Cod!

This French bistro specializes in seafood dishes prepared with local ingredients, which often go from farm to plate in the same day. Oysters are the star of the show, but the menu also includes many other creative dishes and an exhaustive wine list. The owner and chef, Florence Lowell, is originally from Bordeaux, France.

Open Monday-Saturday from noon to 10 p.m.

Located in a tiny cottage, this former seafood market transformed into a restaurant is a favourite with the locals. Chef Jeremiah Reardon makes a legendary lobster bisque and many other dishes to delight your palate. 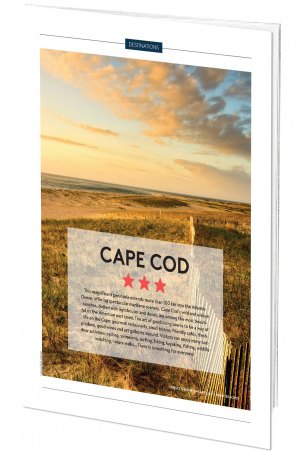