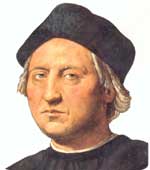 The following year he explored what is now known as Puerto Rico. It is interesting to note that Christopher Columbus discovered the United States while looking for a navigable route to India! The most famous and oldest settlements are St. Augustine's (Florida, 1565), Jamestown (1607) and Plymouth (founded by the Puritan Pilgrim Fathers in 1620). In the southwest, the Spanish expanded New Spain with expeditions from Mexico. In the northwest, the Russians settled along the Pacific coast. Whites came into contact with Native peoples and traded with them. But the Native Americans had no resistance to the diseases introduced by the Europeans (smallpox, measles) and were severely affected by European cultural practices (alcohol, firearms), massacres and colonial wars.

Establishment of the first English settlement

John Smith, accompanied by one hundred English immigrants, established a small settlement in Virginia, which they called Jamestown. John Smith has become widely known in popular culture because of his relationship with Pocahontas (who really existed), the daughter of a local Native American chief. The immigration of English settlers would help shape the country as we know it today. 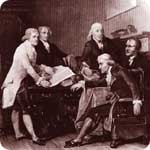 Drafted by Benjamin Franklin and Thomas Jefferson, the declaration was signed on July 4. From that date, the United States of America sought recognition as an independent country no longer under British rule. The War of Independence then ensued.

After several years of war against its former motherland, the United States set up a new government and elected their first president, George Washington. The Treaty of Paris, signed in 1783, officially ended the war and acknowledged the United States as a free and sovereign nation. Following the signing of this treaty, the country was able to pursue the establishment of a national government, with the ratification of a new Constitution in 1789. 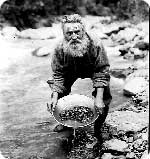 News of the discovery of gold attracted hundreds of thousands of people to California from the rest of the United States and abroad between 1848 and 1855. It is estimated that in two years (1848 and 1849), just under 80 tons of gold were extracted in the State of California. This gold rush significantly increased the population in the western states. The boom died down ten years later, around 1858.

Although the northeastern states of the United States (New England) very quickly abolished slavery from the beginning of the country's independence, nearly three million Black people living in the south of the country were still forced to live as slaves. The clash of values between the northern and southern states generated an unparalleled conflict in the form of a war that would last until 1865. An amendment was finally passed in 1865 that abolished slavery across the United States. However, this did not secure the rights of Black people, as racial segregation was not abolished until 1965!

The Unites States experienced a stock market crash at the end of 1929, sparking a massive recession. A large portion of the U.S. population was plunged into poverty. Twenty years later, the U.S. had entered into an unparalleled period of growth and national prosperity, which continued into the late 20th century. 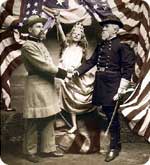 Following its involvement in World War II, the United States displayed its military power in several wars of the time, including the Cold War and the Korean War. American involvement was not limited to the deployment of troops, but included the production of war materials and political and military strategizing, which would forever change the country's place in history.

Walk on the moon

Neil Armstrong became the first man to walk on the moon.

End of the Vietnam War

Fearing the spread of communism across Asia, the United States allied with South Vietnam in their fight against communist North Vietnam in 1955. The 1973 Paris Peace Agreement sealed the defeat of the US and its allies, undermining the image of the US military. It should also be pointed out that this was the first televised war, which further accentuated the Americans' defeat.

The United States is an undisputed world leader a global superpower. This leadership role has attracted many problematic situations, including several terrorism-related events. The country has seen a few social, political and cultural revolutions, the most recent being the election of the first African American president, Barack Obama.