No trip to the east coast of the USA is complete without a visit to the Big Apple.

It's no secret, there are a ton of photogenic locations in New York City!

Discover 15 spots that really deserve a few photos, whether you want to treasure them in an album or post them on Instagram.

BoCoCa is actually an acronym combining the names of three charming Brooklyn neighbourhoods: Boerum Hill, Cobble Hill and Carroll Gardens. Some locals call the area "Little France" because there are so many French people living there.

The area has many lovely typical row houses built from brown sandstone, known as Brownstones. An interesting feature of these houses is the steep staircase rising from the street to the first-floor entrance, which is higher than street level.

And don't miss Smith Street, where a few small French boutiques have opened up shop. It's one of the main commercial arteries in the area.

Be sure to pay a visit to Bar Tabac, a small stereotypically French restaurant/bar complete with a French flag, table soccer, Croque Monsieur and Niçoise Salad, Bastille Day celebrations with a petanque tournament...

It's got everything to please nostalgic European visitors or those looking for the perfect French-American Instagram photo. 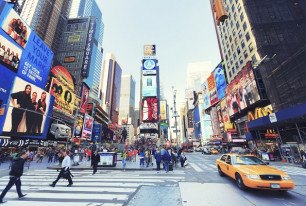 As you wander the streets, you'll come across many startups, a few independent cafes, but most importantly, a ton of murals painted on the walls.

If you enjoy street art, Bushwick is the place to be.

Located on the Atlantic coast, this small Brooklyn neighbourhood (once an island, now a peninsula) is well worth a detour with its beach and popular amusement park.

Boasting the kitschy atmosphere of an old seaside resort, Coney Island offers a multitude of decors for some interesting photo shoots.

The Ferris wheel, called the Wonder Wheel, is particularly fashionable on social media.

And the Coney Art Walls street art museum is a feast for the eyes. This outdoor museum will introduce you to many local artists.

Finally, don't leave the neighbourhood without trying the famous hotdogs at Nathan’s. They're said to be the best hotdogs in the world...

You be the judge, but if it's true, a selfie in front of the legendary establishment is a must!

This marvel of urban development is a former railway line that was transformed into an elevated public park in 2009.

Very popular with tourists, the High Line is a pleasant place where you can get away from the hustle and bustle, take a break in a rest area surrounded by greenery, or admire the many outdoor works of art.

And while you're in the area, don't miss Chelsea Market, which is a must for foodies.

Its impressive architecture leaves nobody indifferent.

In addition to being the most beautiful bridge in the city and one of the most photographed locations in New York City, it offers breathtaking views of the New York skyline.

Crossing the Brooklyn Bridge on foot or by bike will allow you to get some great shots.

One of the most instagrammable images is, of course, a shot of the bridge cables.

Once you reach Brooklyn, head to Brooklyn Bridge Park for a look at Jane’s Carousel, a wooden carousel built in 1922. It's simply magnificent!

If you don't want to walk across the bridge, the NYC Ferry (between Manhattan and Pier 1 in Brooklyn) is a good option for getting good photos.

A classic? Maybe. But it's still a must-see, right?

Whether you like tourist attractions or not, the Statue of Liberty is a New York City icon.

By the way, did you know that it was a gift from France to the Big Apple? To admire it properly, treat yourself to a cruise. On the boat, you'll have plenty of opportunity to take some great photos of the Manhattan skyline, considered to be one of the most beautiful in the world.

Depending on the tout provider you choose, you may even be able to get off on Liberty Island, where the statue is located.

Before boarding the boat, you will have to go through a very strict security check. If you're carrying a backpack (or other bulky object), you'll have to leave it in one of the lockers provided.

These include the 72nd Street Station. Its control house, built in 1904, is now listed in the National Register of Historic Places.

The magnificent mosaic at 34th Street – Hudson Yards Station is also a must-see.

The Smith – 9th Street Station overlooks the city from over 285 m and offers lovely views.

City Hall Station, which is now closed, is an architectural marvel with a unique Romanesque Revival design.

To see it, take Line 6 heading downtown to the final stop. When all the passengers exit the train, stay (discreetly) on board. You won't be able to get out, but you'll still have the chance to take some great photos.

The station names written in tiles also make a great background for an impromptu photo shoot.

This observation deck is located on the 70th floor of Rockefeller Plaza.

It offers spectacular 360-degree views of the city.

A classic that can't be beat.

How could I not mention Times Square, the most famous and lively place in the Big Apple.

Whether or not you enjoy visiting touristy spots, this one is a must. Try to go there early in the morning to avoid the crowds. It is located on the corner of 7th Avenue and W 47th Street.

If you're not fazed by hordes of people, then the evening is the best time to go!

In any case, the huge billboards that flash day and night will certainly inspire you to take a ton of photos.

Of course, you simply must immortalize a few yellow cabs.

Just outside of Manhattan, make your way to Washington Street for one of the best shots of the magnificent Manhattan Bridge.

Then continue down Washington to Water Street, where you will find yourself at the foot of the bridge.

Try to come here early in the morning, or at the end of the day at sunset.

Be sure to take a walk in Central Park, the lungs of the city.

This vast peaceful oasis in the heart of downtown features many attractions worthy of mention.

These include the trail around the Jacqueline Kennedy Onassis Reservoir, the largest body of water in the park. In springtime, when the cherry trees along the trail are in bloom, the view is even more beautiful.

The Bethesda Fountain, the sumptuous Belvedere Castle and the famous Strawberry Fields Memorial are some of the other must-sees in Central Park.

This former port converted into a lovely urban park is located in the borough of Queens.

It boasts spectacular views of some of the best-known landmarks of New York City: the United Nations Headquarters, the Chrysler Building, and the Empire State Building.

It's also the perfect place for a romantic sunset stroll.

This observatory at the top of the 1 World Trade Center offers visitors panoramic views of up to 80 km on a clear day.

This 104-storey tower is located next to the site of the former World Trade Center, made infamous by the tragic attacks of September 11, 2001.

Nearby, you will see the 9/11 Memorial, where two enormous reflecting pools now occupy the space that the Twin Towers once did. Note that this is not a place for a photo shoot. It is a place of meditation that pays homage to the almost 3,000 victims of the tragedy.

Bounded by Canal Street to the north, Essex Street to the east, Worth Street to the south and Broadway to the west, New York City's Chinatown is a complete change of scenery with its small authentic shops and restaurants.

Doyers Street is particularly photogenic with its colourful facades and its many Chinese signs.

But beware, the past of the small 61-m-long street is not as happy as its colourful buildings might suggest.

In the 1930s, it became known as the "Bloody Angle" or "Murder Alley" because of the numerous killings that took place there between rival gangs.

Don't leave without sipping a drink on the rooftop of The Crown, where you will enjoy a lovely view of the city.

The central concourse of this train station is a magnificent architectural work of art.

Located in the centre of Manhattan, it is the largest train station in the world.

The station has several must-see features, including the four-faced clock installed above the information desk. The value of each of the brass and opal faces is said to be estimated at more than 10 million dollars!

Take a look at the ceiling, which is covered with more than 2,500 paintings by artist Paul César Helleu. The fresco represents the zodiac constellations and was once covered by a black layer of nicotine.

Restored in 1999, the ceiling is now impeccable. However, you may notice a small black rectangle, left as is as a reminder of the pollution caused by cigarettes in the past.

Finally, you can also see and photograph the largest Tiffany glass clock in the world. It is on display outside the building, on 42nd Street.

And there you go!

Do you have any other favourite photo spots? Don't hesitate to share them in the comments area below.

An enthusiast of both our vibrant cities & great oudoors, my life revolves around travel & adventure. It's a no brainer that I have to share the wonders & secrets of my neck of the woods with other travelling souls. Enjoy the journey!

Your e-mail address will not be shared

Highway 1 between Los Angeles and San Francisco: The complete guide