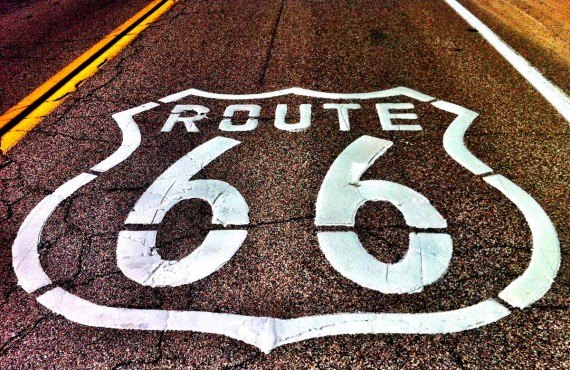 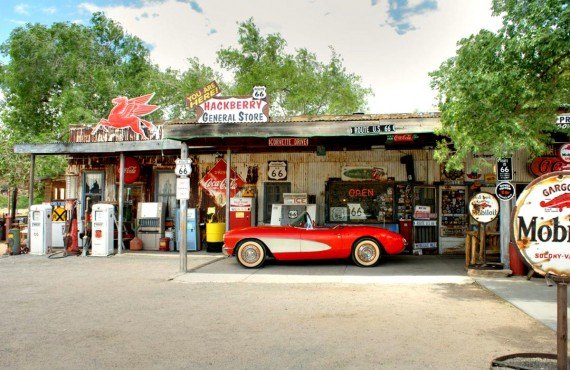 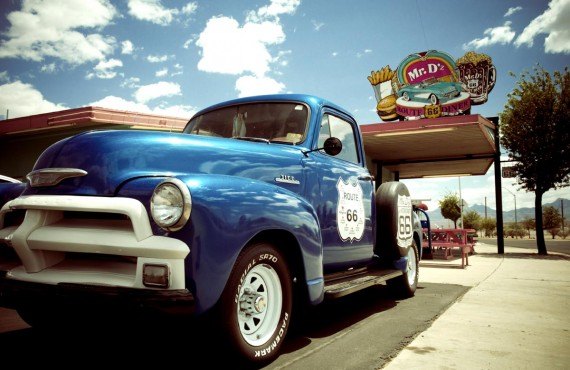 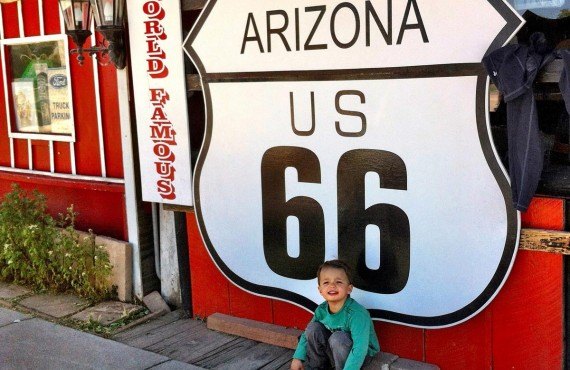 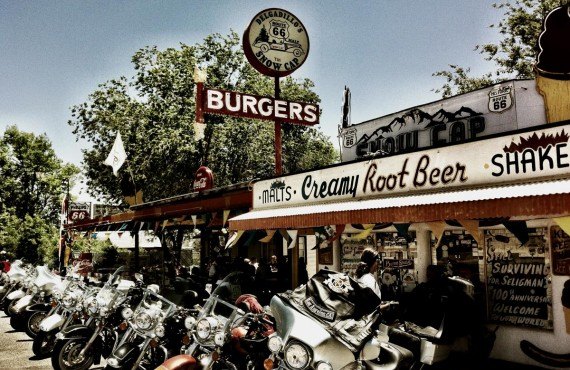 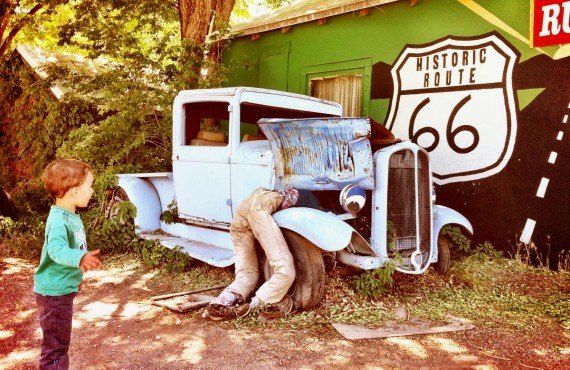 Kingman prides itself on being the historic heart of Route 66 and depends heavily on tourism.

It is also considered a "stopover town" that helps break up the long distances between California and the Grand Canyon, whether by car or on a USA motorhome holiday.

Hackberry General Store houses so much Route 66 memorabilia that it is practically a museum. You can also purchase souvenirs such as maps, books and tin "Route 66" signs. No gas is sold here, but the vintage Mobilgas pumps are still standing outside.

The Historic Route 66 Museum, which is housed in Kingman's Historic Powerhouse building, is truly unique in that it is located along the longest remaining stretch of Route 66. The museum depicts the evolution of travel along what came to be known as the "Mother Road" through paintings, photos and life-sized dioramas.

Built in the mid-1920s, Cool Springs camp and service station was an important stop for motorists travelling Route 66 from the very earliest days. In the mid-sixties, a fire burned Cool Springs to the ground, and it was just a crumbling stone relic for the next quarter of a century. The place was completely rebuilt in 2001, and today it is a gift shop selling all kinds of Route 66 souvenirs and memorabilia.

Located almost halfway between Kingman and the south rim of Grand Canyon National Park, the town of Seligman is a jewel of the famous Route 66. A visit to Seligman is a real trip back in time as it boasts one of the few stretches of original highway. While you're there, you simply must pay a visit to the historic all-American eatery Snow Cap Drive-in, in operation since 1953 and a true relic of Route 66.

Another must-see is Angel and Vilma's old-fashioned Route 66 Gift Shop and Museum, a gift shop overflowing with Route 66 souvenirs and antiques.

Oatman is an authentic, unreconstructed ghost town typical of the southwestern United States. This was a popular gold rush destination between 1904 and 1931, and its mines produced more than $26 million worth of gold. The town was gradually abandoned as prospectors began to leave the area in the 1930s, but it was the re-routing of Route 66 in the 1950s that truly sealed its fate and turned it into a ghost town. Its current population is less than 50 people, whereas at its peak it supported more than 10,000. Nevertheless, the town is now rising from its ashes and boasts souvenir shops, restaurants, a hotel and more.

Today the town is also home to a large population of wild burros, descendants of the beasts of burden brought to the area by long-ago miners, which wander freely through the streets. The road to Oatman is quite sinuous with sharp bends and may be challenging in a large RV. However, rest assured that we tried the drive with a 31-foot RV and it is possible to do.

Kingman is certainly not the place for fine dining, as good restaurants are few and far between. However, here is a suggestion that is worth the detour, especially for its vintage decor and true American experience:

This quintessential American diner with its 1950s decor is one of the most popular restaurants on Route 66. It serves classic American fast food and is famous for its homemade root beer and pizza. The dining room is loaded with Route 66 memorabilia and the diner has served notable celebrities such as Oprah Winfrey. A must-try!

Named in honour of Andy Devine, a western character actor and beloved son of Route 66 who was born in Flagstaff and grew up in Kingman, the festival showcases the Mother Road and everything connected to it. The festival schedule includes a variety of activities such as an art show, a car show, mechanical bull rides and free outdoor live entertainment, as well as a parade through the streets of Kingman.

This 3-day festival features a classic car and motorbike parade, concerts, a BBQ and more! 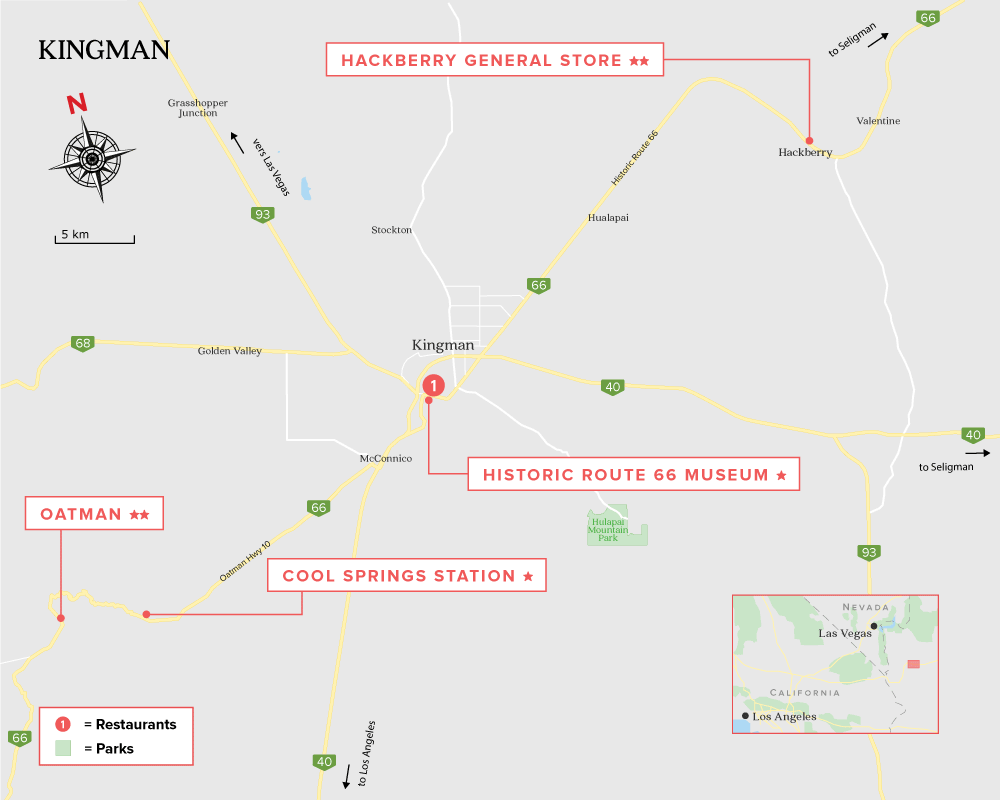 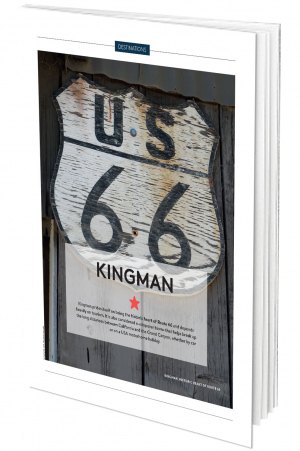