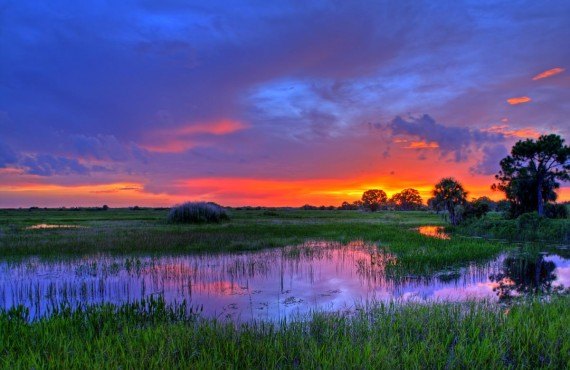 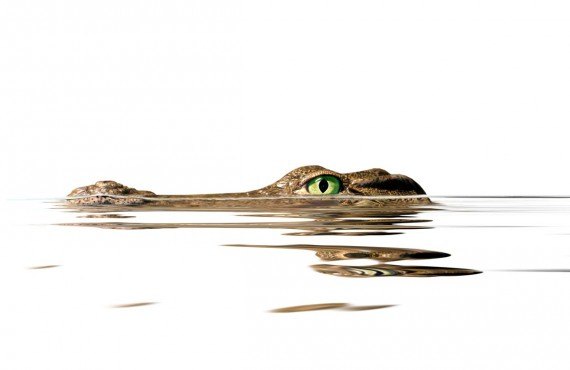 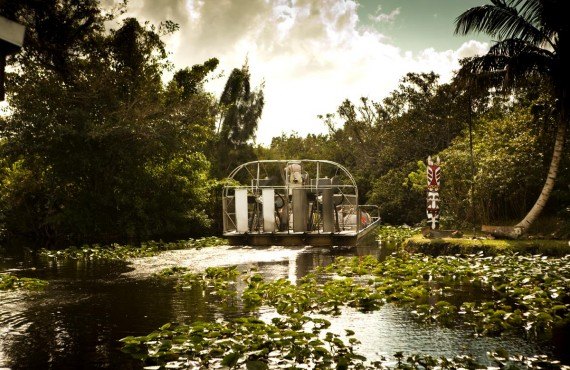 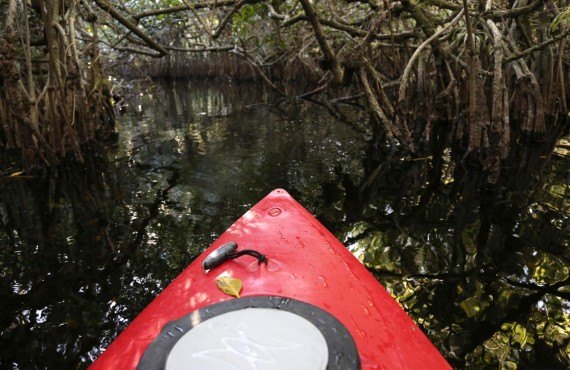 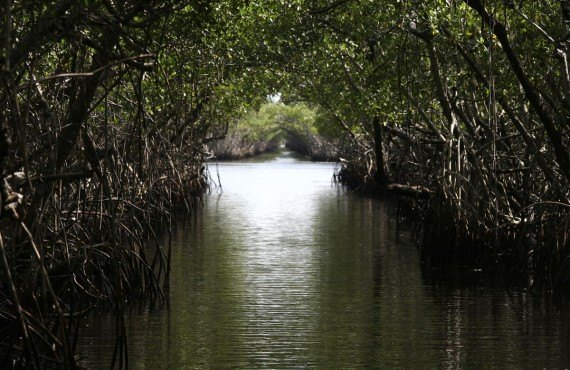 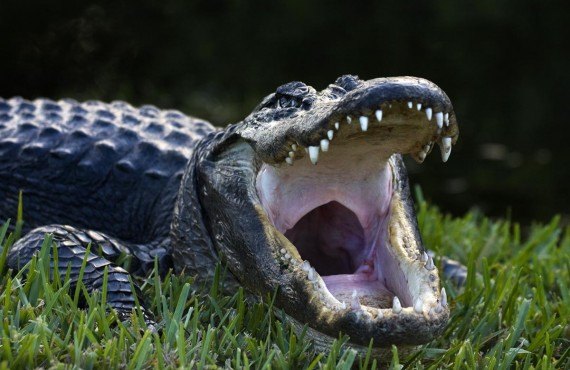 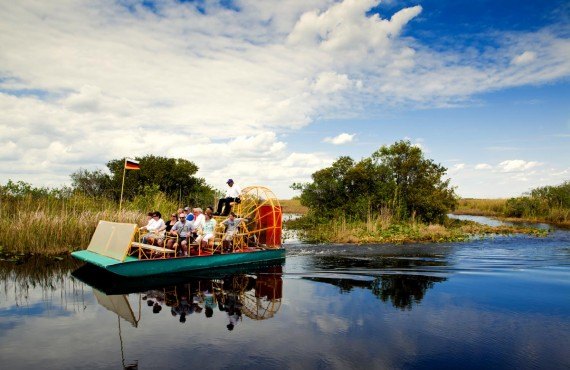 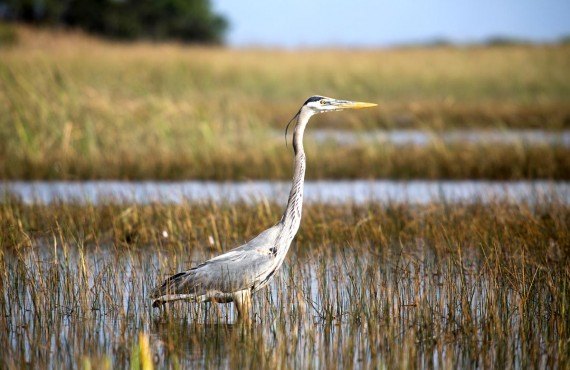 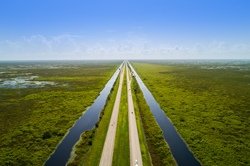 The Everglades cover the entire southern part of Florida, and Everglades National Park is the largest subtropical wilderness in the United States. It was created to protect these fragile ecosystems that have long been threatened by human activity.

Declared a Biosphere Reserve in 1976 and classified as a Wetland of International Importance in 1987, the park has also been a UNESCO World Heritage Site since 1979.

You will have a good chance of viewing some of the area's iconic wildlife, including alligators, crocodiles and even Florida panthers, as well as many species of birds, fish and amphibians. You will also enjoy exploring the park's mysterious swamps. Keep your camera at the ready! 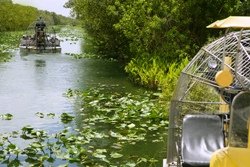 The Everglades are associated with crocodiles and alligators, swamps and boat exploration. A thrilling airboat ride is a must! Learn all about this unique and impressive environment while you take in the sights. Several companies offer this type of tour, including Sawgrass Recreation Park, which also has reptile and endangered wildlife displays. Open daily from 8 a.m. to 5 p.m.

The park's main entrance is in Homestead, south of Miami, on Route 9336. Start with a visit to the Ernest F. Coe Visitor Center to watch an educational film on the Everglades.

Six kilometres beyond the visitor center is the Royal Palm visitor center an interactive exhibit that presents the different ecosystems found in the park. Two walking trails begin nearby: Anhinga Trail and Gumbo-Limbo Trail . 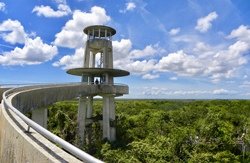 About 20 km south of the main entrance there is another short trail leading to Pa-hay-okee Overlook . This observation tower offers a magnificent panoramic view of the Everglades.

A little further on, West Lake Trail boardwalk trail wanders along the edge of West Lake through a mangrove forest, a fantastic tangle of raised roots and branches typical of the region.

In the extreme south of the park, about 65 km from your starting point, you will reach the village of Flamingo on Florida Bay, home of the Flamingo Visitor Center. 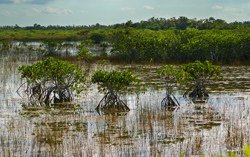 Tamiami Trail (US 41) is a small road between Miami and Naples that offers many attractions. It crosses Florida from east to west, passing through Big Cypress National Preserve and following the northern edge of Everglades National Park.

Shark Valley is part of the national park (admission is included with the entry fee) but is on US 41, to the north. Pay a visit to the Shark Valley Visitor Center and then set out along Shark Valley Loop Road , a 22-km paved trail where you will discover a wide diversity of animals and plants. You can walk, rent a bicycle or take a tram tour. 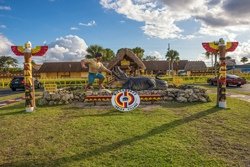 Miccosukee Indians have been living in the northern Everglades since the mid-19th century. The tribe currently has about 500 members. The village recreates a traditional camp with palm frond shelters and embroidery and patchwork workshops. There is a small museum on the site and shows in the alligator pit, where alligator wrestlers demonstrate centuries-old techniques for catching the formidable reptiles.

You can also take a Miccosukee-run airboat tour. Glide through the magnificent “River of Grass” and get a glimpse into the area's rich history and culture as expert guides show you a side of the beautiful Everglades you can’t see anywhere else. Miccosukee restaurant offers the chance to try authentic American Indian cuisine (see “Where to eat”).

County Road 94, better known as Loop Road, is an interesting 90-minute detour off the US 41. There are many bridges along the way where you can stop and look for wildlife. And keep an eye out for alligators: they're everywhere! 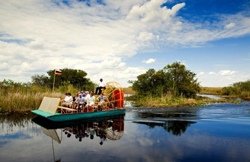 The Gulf Coast Visitor Center is in the village of Everglades City and marks the western entrance to the park. The western part of the park is accessible only by boat. The Wilderness Waterway, a 165-km canoe trail, connects Everglades City to Flamingo in the south of the park. You can also explore the Ten Thousand Islands, a chain of coastal islands, home to manatees and dolphins. Canoes and kayaks can be rented at the visitor centre.

There are several options for nature cruises in the area, including Everglades City Airboat Tours. Last chance to take an unforgettable nature tour of the beautiful Everglades. Open Monday-Saturday from 9 a.m. to 5 p.m. Reservations necessary.

There are few restaurants in the area. The easiest and most enjoyable way to make the most of your park visit is to bring picnics and snacks that you can eat whenever you want, in the heart of nature.

If you'd like to try alligator meat, this small local snack bar style restaurant is the place to be. You'll find that it tastes a lot like chicken. If you're not tempted by alligator, there are also other choices on the menu. You can take your meal to go, eat it at the counter or eat it outside on the patio. Open daily from 11 a.m. to 6:30 p.m.

Miccosukee is located at the Shark Valley entrance and specializes in Native American food. It's not fine dining, but if you are looking for a place to have lunch in the area, this is a good option. They offer Miccosukee fry bread, pumpkin bread, Everglades frog legs, catfish, as well as standard American cuisine. Open daily from 8 a.m. to 6 p.m.

This charming and popular restaurant is often recommended by the locals. It enjoys a convenient location in Everglades City, close to the tourist attractions. The food is fresh and delicious and the service is excellent. The gator tacos are a must-try! Open Wednesday-Saturday from 11 a.m. to 9 p.m.

The ESTA in 5 easy steps