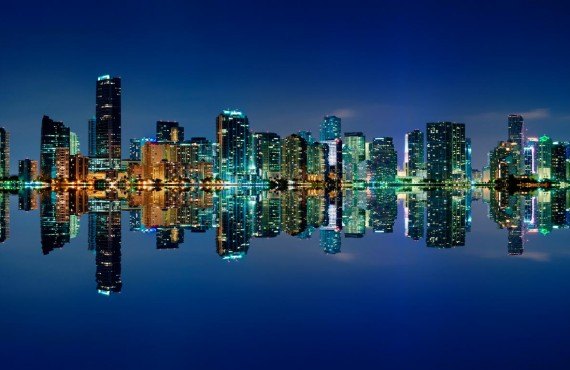 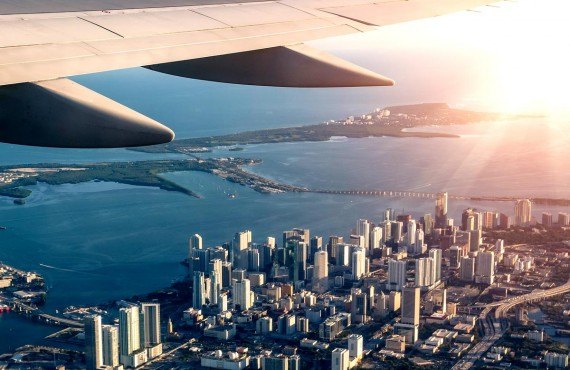 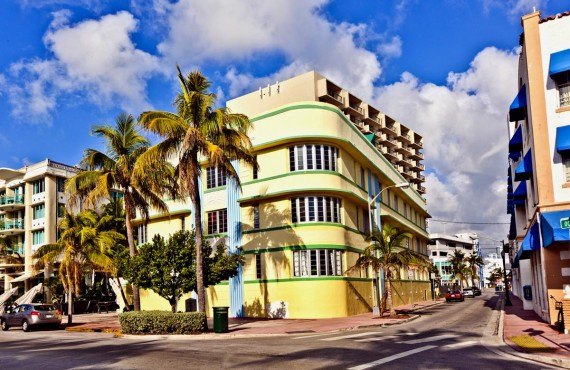 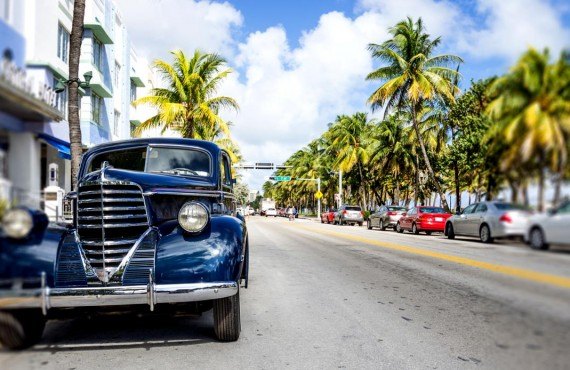 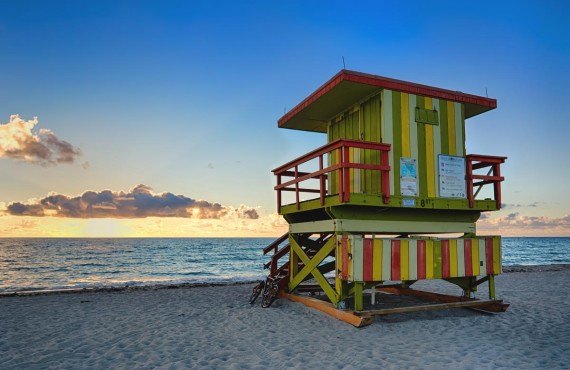 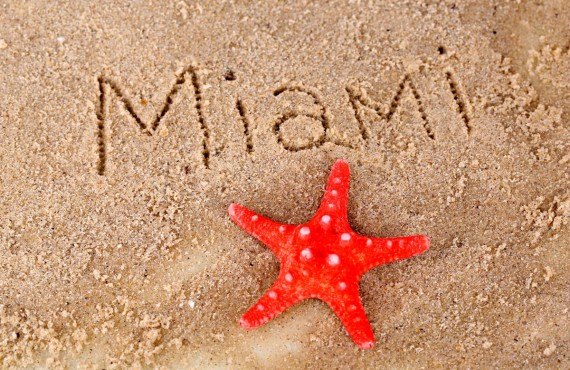 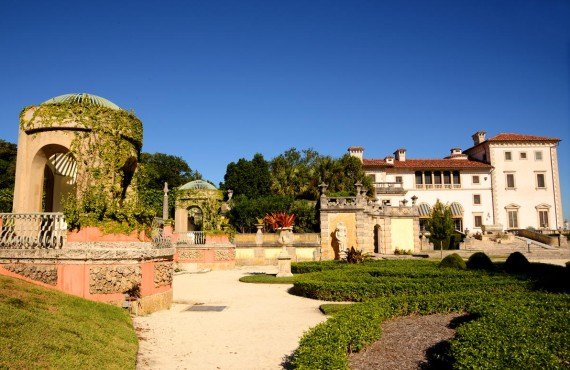 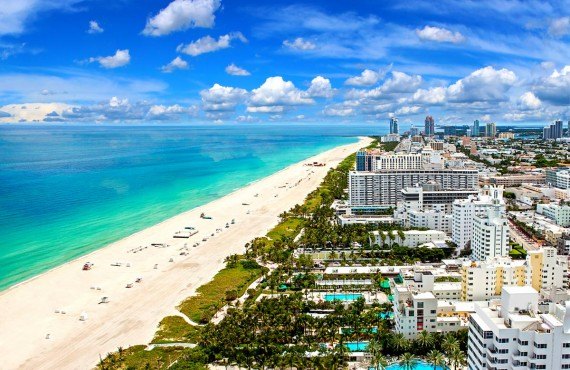 Once a small city living off citrus farming, Miami is now one of the most popular tourist destinations in the country. Although it only has a population of 470,000, its metropolitan area is the most populous in Florida.

Come join the party in the most Latin city north of Mexico.

Miami Beach is located on a peninsula about 14 km long connected to the mainland by several bridges. It is the most popular part of Miami. Almost all the tourist activity can be found in South Beach , known as "SoBe" (south of 23rd Street).

This mythical broad avenue running parallel to the ocean is the main thoroughfare of South Beach. Go for a stroll and discover the many sidewalk cafes, restaurants, bars and other trendy businesses to be found there. It's a street that never sleeps! Be sure to visit after dark to see the lights and mingle with the crowd.

Across the boulevard is South Beach , Miami's best known and busiest beach. It is, of course, a must-see attraction. For a more family-friendly atmosphere, try between 53rd and 63rd.

You can also pay a visit to Lummus Park along the beach (between 1st Street and 15th Street), a popular spot for walkers and joggers.

This section of Miami Beach contains the largest collection of Art Deco buildings in the world, recognizable by their clean lines and rectangular forms. After a downturn in the city's real estate market, the area was designated a U.S. Historic District in 1979 with its almost 800 buildings built between 1923 and 1943. Originally painted white, they now have more tropical colours and are often decorated with neon lights. This district also attracts a host of locals and visitors with its trendy nightclubs and boutiques.

You can use the parking metres in the streets or use the public parking lots between 7th, 12th, 13th and 17th Streets. Begin your tour with the Art Deco Welcome Center in Lummus Park.

Between Washington Avenue and Drexel Avenue

Lincoln Road is a wide pedestrian road running east-west, perpendicular to the ocean. It is the oldest commercial street in Miami and is home to a multitude of shops, galleries, restaurants and a small central square with fountains. You will also find cinemas, a concert hall, and ArtCenter South Florida, which houses several artist's studios, some of which are open to the public. There is tramway service between Washington Avenue and Alton Road.

This moving monument is a memorial to the Jews who perished at the hands of the Nazis during the Second World War. It is located on an esplanade, surrounded by water and water lilies. The statue by Kenneth Treister, Sculpture of Love and Anguish, which represents a hand stretched towards the sky, symbolizes the last gesture of a dying person.

Located between Miami Beach and downtown, this children's museum is both entertaining and educational. On the second floor, kids can play with adults as they visit different workshops: grocery store, bank, veterinarian, fire station, etc. On the second floor, they can showcase their artistic talents by playing musical instruments and doing drawing or painting. You will also find a climbing wall and a room filled with stuffed animals.

Bordered by Biscayne Bay and the Miami River, downtown Miami may seem a little sleepy next to the crowded beaches of Miami Beach, but it is worth a mention. You will easily recognize it by its collection of skyscrapers.

Located near Biscayne Bay, this market built in 1987 caters mainly to tourists from cruise ships. It features many souvenir stands, shops and restaurants, including the Hard Rock Cafe and its enormous yellow guitar! You will also be able to see Fisher Island, the "wealthiest zip code in America", a members-only island inhabited exclusively by millionaires in lavish mansions.

The market is open Monday-Saturday from 10 a.m. and Sundays from 11 a.m.

Although it is very touristy, the Millionaire's Row Cruise is a great way to explore Biscayne Bay. It lasts an hour and a half and provides spectacular views of the Bay with its luxury islands, the Port of Miami with its immense cruise liners, the beautiful downtown Miami skyline, and “Millionaire's Row” with the homes of the rich and famous such as Puff Daddy, Julio Iglesias, Gloria Estefan and Oprah Winfrey.

There are several departures every day, between 10:30 a.m. and 7 p.m. Other excursions are also available.

This area once full of warehouses is now a world-renowned art district. There are many galleries, and to see the artists at work, be sure to visit mid-week.

And if you need new shoes, pay a visit to the huge specialized warehouses on NW 25th and NW 26th. You'll find the right shoe for you, guaranteed!

There are many Cubans in Miami, many of whom live in the vibrant Little Havana community. The heart of the historic neighbourhood is characterized by its street life, music and good food. Take a walk along Calle Ocho (8th Street), the main street, to discover its restaurants, cigar shops and barber shops, its delicious café cubano, and Maximo Gomez Park (corner of 15th Avenue), where the locals get together every day to play dominos.

This neighbourhood is bordered by the Miami River to the east, SW 37th Avenue to the west, NW 7th Street to the north and Coral Way to the south.

The chic Mediterranean-themed community of Coral Gables is a favourite nightlife destination among Miami residents, but it is also very popular with tourists. Four large gates mark the entrance to the city. You can use a metered parking spot, on Coral Way for example, and then explore on foot. For a detailed map, go to City Hall:

A walk along the main street, Coral Way, also known as Miracle Mile, provides a good overview of the neighborhood. It is also a prime evening destination for Miami denizens.

Built in 1926, for a long time this architectural masterpiece was the most prestigious hotel in southern Florida. The iconic cake-shaped building is easily recognizable with its 91-metre tower, inspired by La Giralda in Sevilla, Spain. Dare to enter the lobby to admire its sumptuous decor. In addition to a lavish clubhouse, the Biltmore has 20 tennis courts, two golf courses, horseback riding trails, a polo field and a huge swimming pool, apparently the largest in the country!

Venetian Pool was created from a former coral rock quarry, and is a recreation facility unlike any other. The magnificent site features waterfalls, cave-like grottos and a large swimming pool with a footbridge leading across it. It's the perfect spot to go swimming, enjoy a drink on the patio, or just take in the scenery.

Open in summer, Monday-Friday from 11 a.m. to 7:30 p.m. and weekends from 10 a.m. to 4:30 p.m. Please note that sale of admission tickets ceases for the day once the pool has reached maximum capacity, and children under 3 are not admitted.

Inaugurated in 1938 and covering an area of 34 hectares, this tropical garden is the most beautiful in Miami and one of the largest in the country. It has 12 artificial lakes and more than 2,500 plant and tree species, including several rare and endangered species. You can explore the garden on foot or climb aboard a tram for a 45-minute narrated tour (departures every hour).

This scenic park has a beach with a magnificent view of Miami and a man-made atoll pool, which is flushed naturally with the tidal action of nearby Biscayne Bay. It is a nice stop for a quiet swim or to grab a bite to eat before resuming your tour of the city. You will find picnic areas, a marina, a snack bar and a good restaurant, the Red Fish Grill (www.redfishgrill.net).

The park is open from sunrise to sunset.

Hugging the shoreline of Biscayne Bay, Coconut Grove is another magnificent neighbourhood with a warm, laid-back Florida atmosphere. It features historic residential streets and a lively centre that is one of Miami’s favorite neighborhoods for locals and visitors alike. Coconut Grove also has a number of outdoor festivals and events.

In 1916, Illinois native and businessman James Deering built this opulent Italian Renaissance-style villa with the help of decorator Paul Chalfin and architect F. Burrall Hoffman Jr., so he could spend the winters in a warm climate by the sea. Today, the most beautiful house in Miami is also a museum. You can tour the villa's antique-filled rooms as well as its indoor courtyard and nearly 4 hectares of Italian Renaissance gardens.

This trendy district is extremely popular with young professionals and students. Take a walk along Streets of Mayfair and CocoWalk with their upscale shopping, bars and cinemas, Commodore Plaza with its cafes and patios, or Fuller Street with its bookstores.

This 2-hectare Florida State Park contains the historic former home of Ralph Middleton Munroe, one of Coconut Grove's founders. You can tour the family home, built in 1891, and the boat house and see a replica of a yacht designed by Munroe himself.

The Miami Zoo is the largest and oldest zoological park in Florida. The region's hot climate makes it possible for the zoo to house more than 500 animal species from Asia, Australia and Africa. Shows are presented throughout the day. A 4.8-km footpath leads through the park, while a monorail system offers tours with magnificent views. There are also restaurants and water games.

Key Biscayne is a barrier island in Biscayne Bay, about 3.2 km from downtown Miami. Former American president Richard Nixon purchased a summer home there in 1970, and the community has been attracting tourists from around the world ever since. The island boasts luxury hotels, gourmet restaurants and the most beautiful beaches in Florida. It's worth a visit if you have the time! You can drive there via the Rickenbacker Causeway.

This natural park in the southern part of Key Biscayne offers magnificent views of downtown Miami and cycling and walking trails along the bay. It is a popular spot for biking, walking, kayaking, fishing and swimming. The park is also home to a historic lighthouse built in 1825. Guided tours of the lighthouse and keeper's cottage are available twice a day, from Thursday-Monday. You can eat at one of the park's two restaurants or enjoy a picnic. Bicycles, lounge chairs and umbrellas can be rented on location.

Open every day from 8 a.m. until sunset.

This is one of the best Italian restaurants in Miami Beach. A favorite both for the service and the quality of the food. The fresh pasta, prepared before you, is simply perfect. Be sure to make a reservation.

Known for its great selection of creative ceviches and fresh and tasty seafood, this Peruvian restaurant provides a unique gastronomic experience. The Ceviche Ganador, invented by chef and owner Juan Chipoco, is one of the most popular dishes on the menu. You will also find many other traditional dishes from Peru.

YUCA stands for Young Urban Cuban American. This trendy Cuban restaurant is located in the heart of South Beach. It offers a friendly atmosphere, original cuisine with fresh ingredients, a warm welcome and a beautiful setting.

Open Sunday-Thursday from noon to 11 p.m. and Friday-Saturday until midnight.

A delight for steak lovers! With its classically elegant American decor, this downtown Miami restaurant is renowned for its excellent dry-aged steaks. Attentive service and an exceptional wine cellar.

The Juvia Terrace offers a spectacular view of Miami. The setting is worth it, even if you just go for a drink. The menu is varied and features a wide array of cocktails. It is best to reserve for a good seat. 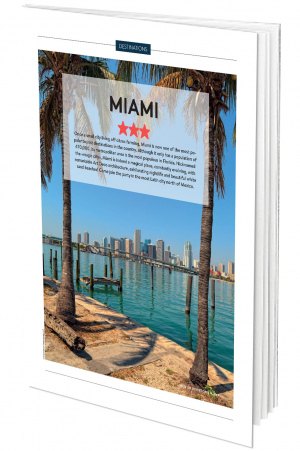