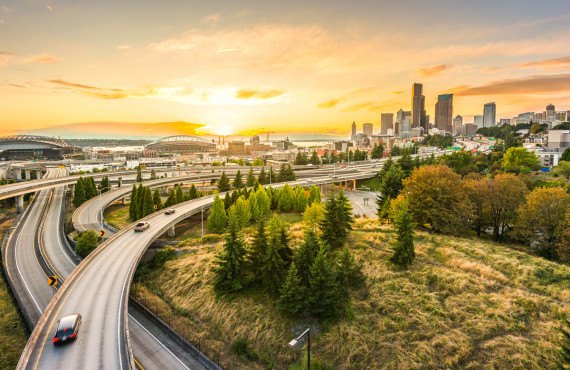 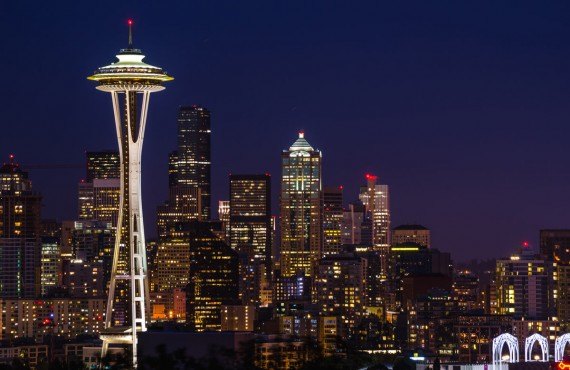 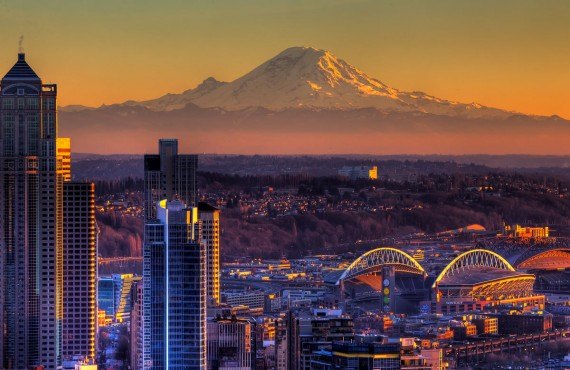 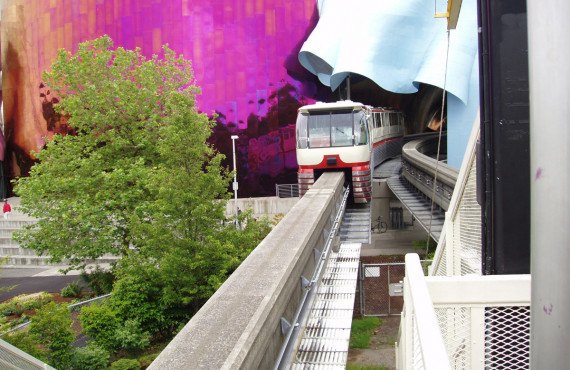 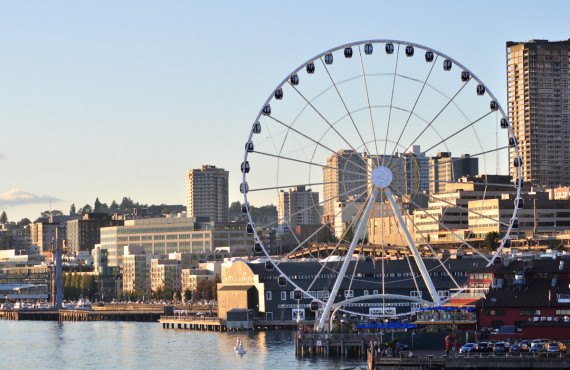 Seattle is a charming port city nestled between mountains and the Pacific Ocean. It has a strong cultural influence, notably as the birthplace of Grunge music, and has produced several corporate giants including Microsoft, Boeing, Amazon and Starbucks.

Seattle enjoys a mild, temperate climate and, with its 125 parks, it is affectionately known as the "Emerald City". Before the arrival of European explorers in 1851, the area had been inhabited by Native American tribes for more than 4,000 years. In fact, Chief Seattle, a prominent leader of his time, is featured on the city's flag.

Pike Place is one of the oldest farmers markets in the United States. It covers more than three hectares and is filled with produce stands, craft stalls, food stalls, shops and restaurants. Be sure to get a coffee at the very first Starbucks, which opened in 1972 at 1912 Pike Place.

Pike Place Market's unofficial mascot, Rachel the Pig, a bronze cast piggy bank that weighs 550 pounds, stands at the main entrance to the market. Rachel collects money for the Market Foundation to fund social programs. It is said that she can receive up to $9,000 a year!

Open daily from 9 a.m. to 6 p.m. (closed on the 4th Thursday in November for Thanksgiving and on December 25). Arrive before 11 a.m. to avoid parking problems. Corner of 1st Ave & Pike Street, Seattle

The Seattle Art Museum (commonly known as "SAM") is a world-class museum and a must-visit for art lovers, from neophytes to experts. The museum's growing collection contains more than 25,000 works of art from around the world.

The iconic Seattle Great Wheel is not to be missed, if only to enjoy the most spectacular views of the city, the ocean and the surrounding mountains.

Unlike traditional Ferris wheels, this giant wheel is equipped with fully-enclosed, climate-controlled gondolas that can seat up to 8 people. The views at sunset are simply stunning!

If you're in the mood for an island getaway, catch a ferry on Pier 52 to Bainbridge Island, a charming island just off the coast. The ferry crossing takes about 35 minutes.

Once on the island you can enjoy a stroll through one of the many parks, explore art galleries and eclectic boutiques, try a local restaurant, or sample wines at a vineyard.

The monorail, which was built for the 1962 Seattle World's Fair, is one of the city's icons. It has two stations, connecting downtown (Westlake Center) to Seattle Center via 5th Avenue, a distance of 1 mile (1.6 km). Today it carries more than 2 million passengers each year and up to 6,000 passengers per hour in both directions.

A one-way trip costs $3 for adults and $1.50 for youth (ages 6-18). Cash payment only. If you are leaving from downtown (Westlake Center at the corner of 5th Ave and Pine St.), park at Pacific Place Parking Garage (entrances on 6th and 7th Ave between Olive Way and Pine St. - about $10 for 2 hours). If you take the Seattle Center Monorail (next to the Space Needle), park at Seattle Center 5th Ave Garage (entrances on Harrison St. and Republican St., east of 5th Avenue - about $13 for 2 hours).

This museum, created in 2000 by Microsoft co-founder Paul Allen, is dedicated to contemporary popular culture, and explores the ideas and risks that fuel it. With its roots in rock 'n' roll, the so-called "MoPOP" has several collections, exhibits and educational programs that use interactive technologies.

The museum's exhibits include: "Pearl Jam: Home and Away", "Minecraft: The Exhibition", "Nirvana: Taking Punk To The Masses", "Guitar Gallery", "Infinite Worlds of Science Fiction", "Sound Lab", "Fantasy: Worlds of Myth and Magic" and more.

Open Thursday-Tuesday from 10 a.m. to 5 p.m. Closed on Wednesdays.

Chihuly Garden and Glass takes visitors on a trip through the colourful, fantastic imagination of artist and glassworker Dale Chihuly, and provides a look at the influences and inspirations that have informed his career. The exhibition includes eight galleries, the centerpiece Glasshouse and a lush Garden.

The museum also has a gift shop and a restaurant. Plan to spend between 1 and 2 hours enjoying all the exhibition has to offer.

Visiting Seattle without going to the top of the Space Needle is like visiting Paris without going to the top of the Eiffel Tower. This 183-metre metal tower is a symbol of Seattle and a landmark of the city's skyline. You will learn all about the history of Seattle, as well as enjoying 360-degree panoramic views from the observation platform. On a clear day you can see all the way to Mount Rainier.

Open daily from 10 a.m. to 8 p.m. You can also go to the observation deck to watch the sun set over the city while sipping local wine accompanied by local light bites. Reservations required.

This small park is about 20 minutes walk from Seattle Center. It provides some of the best views of Seattle, for stunning photographs of the Space Needle, downtown and the mountains in the distance. A short walk that is really worth the detour!

Founded in 1899, the Woodland Park Zoo welcomes more than one million visitors annually, who come to see the 300 different animal species, living in carefully-made replicas of their natural habitat.

The zoo's 92 acres are divided into bioclimatic zones, featuring different natural habitats and exhibits including the following:

African Savanna, Australasia (Australia, New Zealand, etc.), Humboldt Penguins (from the hot, arid coastal regions of Peru), Northern Trail (Alaska's tundra and taiga), Temperate Forest, Tropical Asia and Tropical Rain Forest. If you have young children, be sure to take them for a ride on the historic wooden carousel with magnificent hand-carved horses.

The Museum of Flight is the largest independent, non-profit air and space museum in the world! Created in 1965, its175 aircraft and spacecraft and thousands of artifacts, and many exhibits and activities bring mankind's incredible history of flight to life.

Don't miss the flight simulators, the many interactive activities, the original Boeing factory building from 1916, the 3D movie theatre and the Space Gallery, which showcases the history of the Space Shuttle.

The museum also houses an indoor playground, the museum store and two cafes.

This family owned and operated establishment has been serving fresh crumpets since 1976. A crumpet is an English griddle cake made with flour, water and yeast. After they come off the griddle, they are toasted and served with sweet or savory toppings or eggs. And they are organic! Also serves fresh-baked scones and a variety of teas and coffees to accompany them.

This craft brewery founded in 1989 is located in downtown Seattle's Pike Place Market neighborhood. You can take a guided tour to learn all about brewing beer and enjoy samples of Pike beer. Pike Brewing also houses two restaurants, The Pike Pub and the Tankard & Tun, a seafood restaurant and oyster bar.

The Pike Pub and the Tankard & Tun are currently open Thursday-Monday from noon to 8 p.m.

The Pink Door has been one of the city’s most beloved restaurant destinations since 1981. Its owner, Jackie Roberts, says of her food that it is "built around the Italian classics: simple, fresh and seasonal". Many dishes are derived from her own family recipes. The atmosphere is warm and convivial.

European-style bistro & bar offering an array of fresh, handcrafted meals. Customers come for their famous Dutch Babies, a popover-like pancake inspired by the German Pfannkuchen, baked in a cast iron pan, which rises while cooking and falls after being removed from the oven. They are served with sweet or savory toppings.

Chef Shiro Kashiba is a true sushi legend! He opened the first sushi restaurant in Seattle in 1970, after training with internationally renowned Chef Jiro Ono in Tokyo's Ginza district. He has been called the "Sushi Sensei of Seattle" and compared to "watching Picasso at work"; it's no accident that the most coveted seats in the restaurant are those at the bar. Sushi Kashiba offers the highest standard of fine Japanese cuisine; you're in for a memorable experience.

A major international festival presenting more than 400 films from over 85 countries.

The festival's main mission is to bring together the communities of the region with more than 5,000 artists performing on 20 different stages. 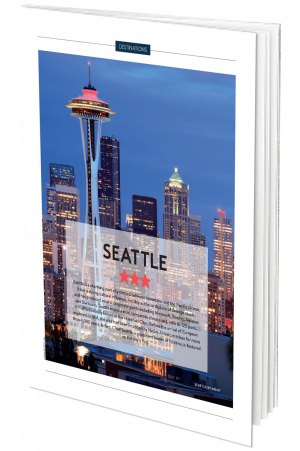