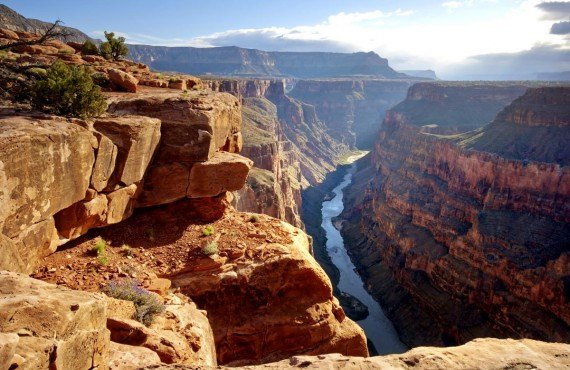 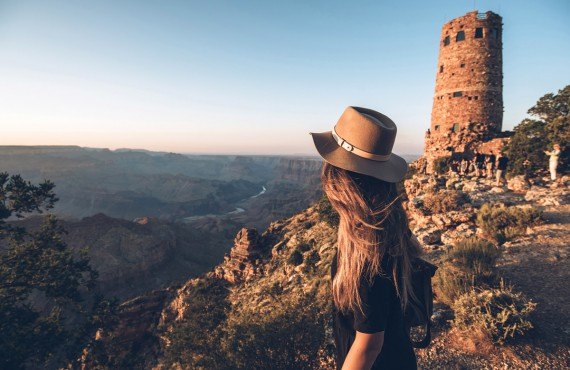 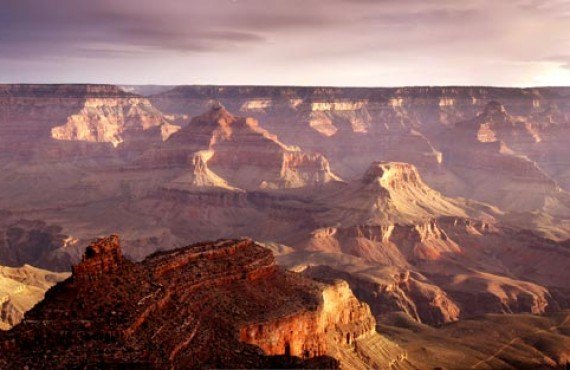 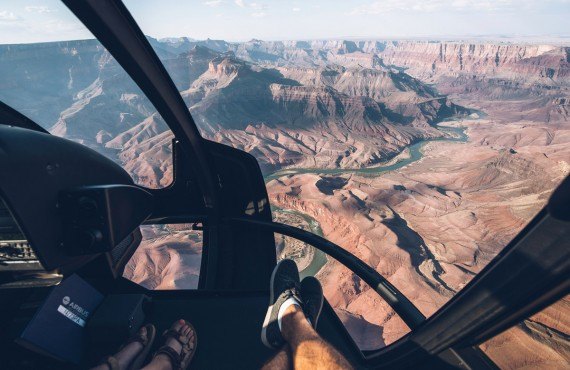 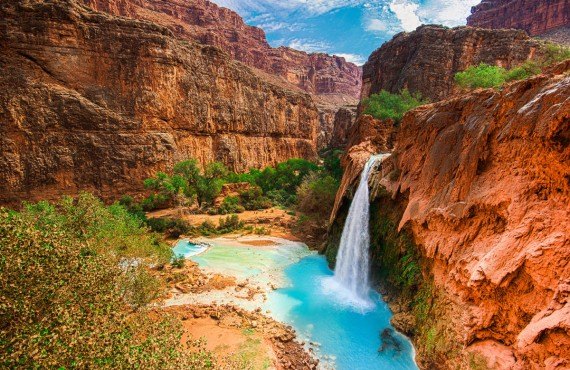 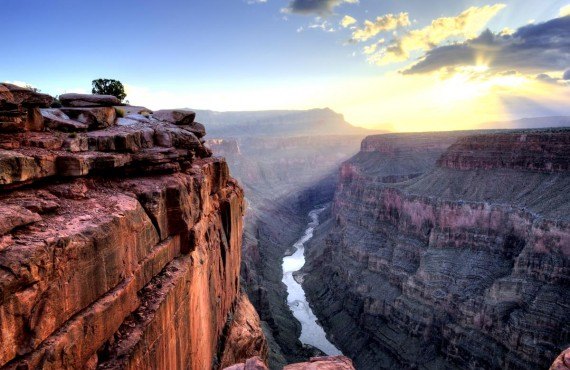 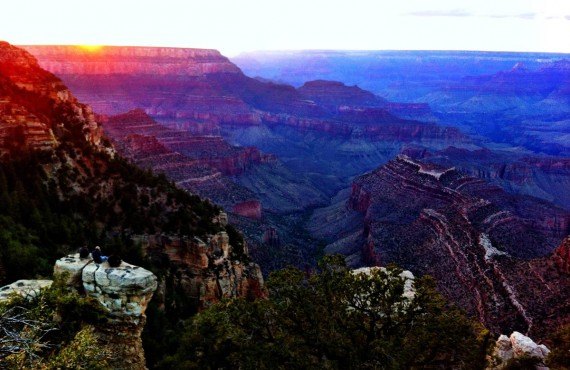 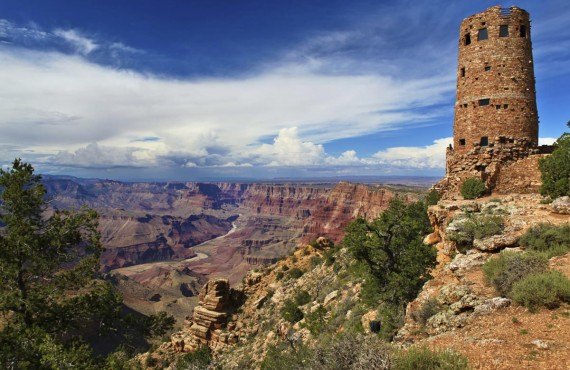 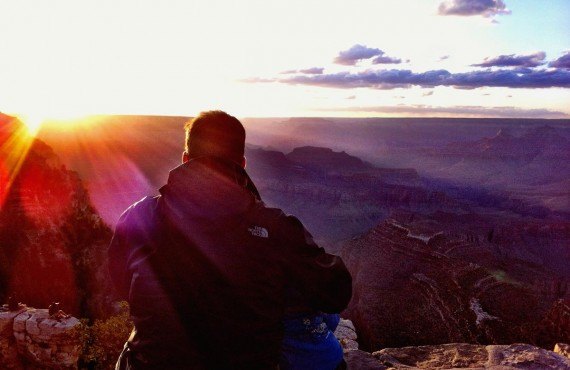 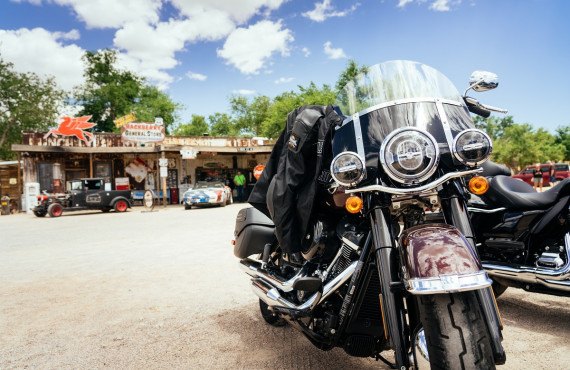 The Grand Canyon is a vast protected area covering 4,531 km2. It is 445 kilometres long and up to 16 kilometres wide (between the North Rim and the South Rim). It is also a unique geological phenomenon whose story began more than 2 billion years ago.

With an average of 4.5 million visitors per year, it is the second most visited national park in the United States (after the Great Smoky Mountains NP). It is the southern edge of the canyon, South Rim, which receives the most visitors.

South Rim is more accessible than the North Rim and has a greater number of spectacular viewpoints. The park was created in 1919 and is a UNESCO World Heritage Site.

The Historic District of Grand Canyon Village contains many histo­ric buildings dating back to the early 20th century. The most luxurious and well-known hotel near the Grand Canyon, the El Tovar Hotel , was built in 1905. Stop there to admire, among other things, its magnificent dark wood lobby.

Be sure to visit Hopi House , a tribute to the Hopi and their ancestors who have inhabited the Grand Canyon for centuries, and Lookout Studio , where visitors can use the telescopes to observe the natural beauty of the canyon. Bright Angel Lodge boasts a fireplace in the lobby featuring all of the rock layers of the Grand Canyon, arranged according to age.

Finally, the Railway Depot marked a turning point in the history of the Grand Canyon when it was completed in 1909, making it more accessible to travellers and at a lower cost.

The Rim Trail is an easy hiking trail that runs directly along the Grand Canyon west of the Visitor Center, offering breathtaking views of the Eighth Wonder of the World.

You can then continue on foot, from one point to the next, or take the shuttle between viewpoints. You can also walk the entire trail, but it is important to note that it is 21 km from the Visitor Center in the east to Hermit's Rest in the west. This makes for a long day of walking, even though the trail is mostly flat. This trail is a great way to discover the spectacular landscapes of the Grand Canyon and its many scenic viewpoints.

Your first view of the most spectacular canyon in the world will almost certainly be at Mather Point , just behind the Visitor Center. Here are some of the other don't-miss viewpoints along the Rim Trail, each of which offers its own perspective:

In high season, the best time to take the shuttle along Rim Trail is in the morning. As of late morning, wait times for the bus become longer and longer and it is not uncommon to have to wait 25-30 minutes (two or three buses) before being able to board.

Desert View Drive is a scenic 40-km stretch of road to the east of Grand Canyon Village that is not covered by the shuttle service. It must be explored on foot or, ideally, by car. It offers several viewpoints on the Colorado River, the most popular of which are:

Grandview Point , which offers panoramic views of Grand Canyon from east to west.

Lipan Point with its superb view of the Unkar Rapids and the Colorado River.

Desert View and its stone watchtower on a promontory overlooking the canyon, providing majestic 360-degree views. The highest spot on the South Rim, the Watchtower is the perfect spot to watch the sun set.

The best time to explore this scenic road is in the afternoon, as this section of the park is usually less crowded at that time.

HELICOPTER FLIGHT OVER THE GRAND CANYON

The ultimate Grand Canyon experience is a helicopter tour... Imagine the spectacular birds-eye view you will have as you soar high over this incredible natural wonder!

The flight will take you from the South Rim to the wilder and less accessible North Rim. A dream come true!

No-frills, casual, affordable, family-style cuisine. The menu includes salads, steaks, ribs, pasta, burgers, fajitas, fish and other traditional fare. Be prepared to wait for a table as the restaurant is often very busy. No reservations are available, and seating is on a first come, first served basis. The decor is simple, with large shuttered windows and original artwork

The perfect spot to grab a coffee, a sandwich, hotdog, pastry, fresh fruit or ice cream. It is located a short distance from Bright Angel Trail Head.

Located on the edge of the Grand Canyon, the Arizona Steakhouse lives up to its name with its regionally-inspired cuisine featuring locally-sourced ingredients and magnificent views of the canyon. The menu features premium steak, ribs, chicken and fish dishes with an Arizona and southwestern flare. Reservations are recommended as the place is quite popular.

El Tovar Dining Room is one of the best restaurants for miles around. This spectacular dining room with its dark wood and stone decor is in the prestigious El Tovar Hotel, built in 1905. It offers a gourmet dining experience in a classic and traditional ambiance, serving contemporary southwestern cuisine with an exotic touch. Guests such as Teddy Roosevelt, President Bill Clinton, and Sir Paul McCartney have dined and shared stories within these walls. Note that reservations are necessary! If it's full for dinner, try for breakfast or lunch.

A chamber music festival offering a variety of concerts. A "treat for eyes and ears". 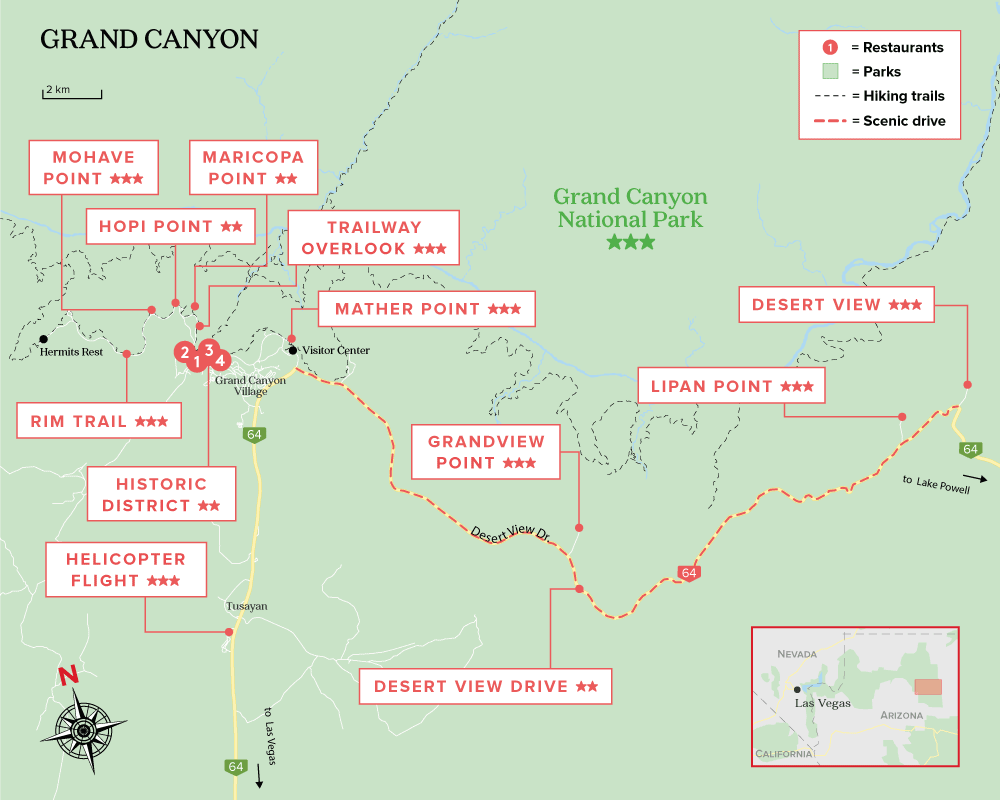 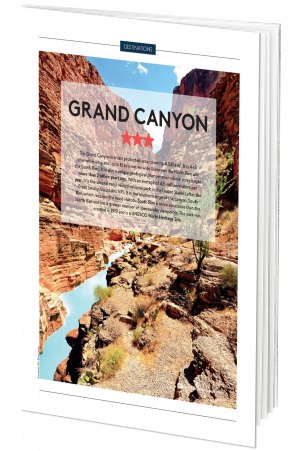