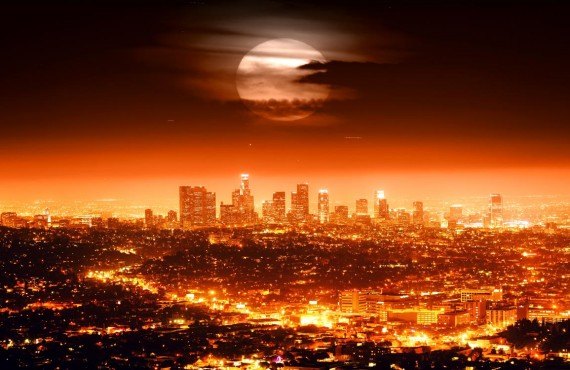 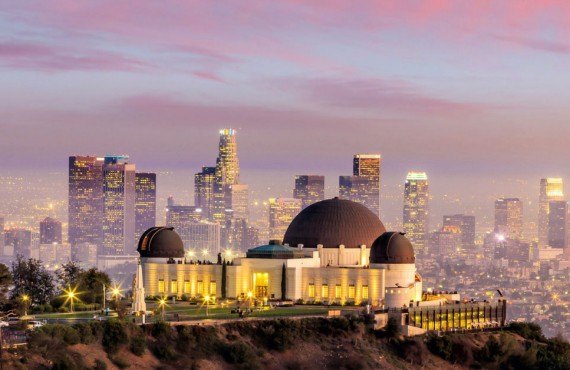 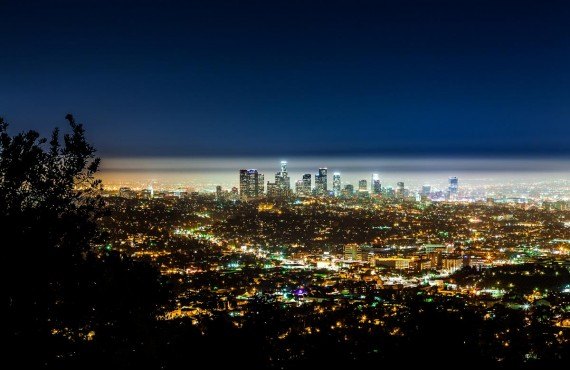 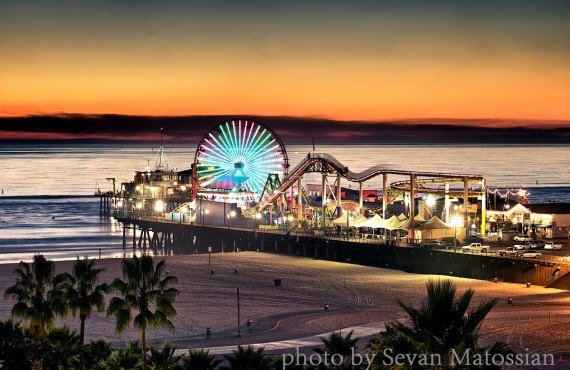 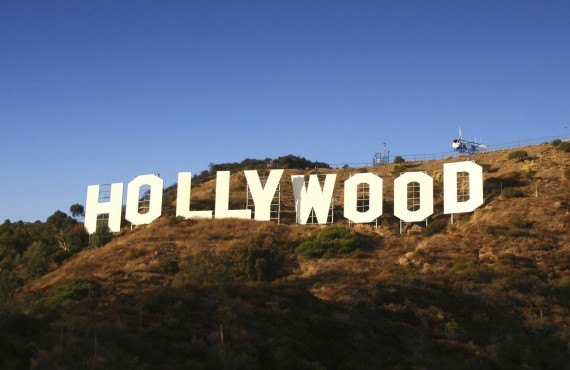 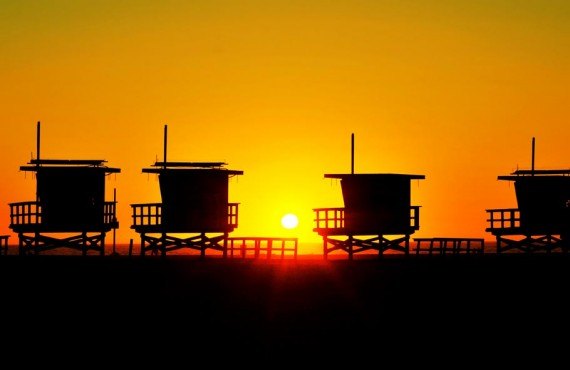 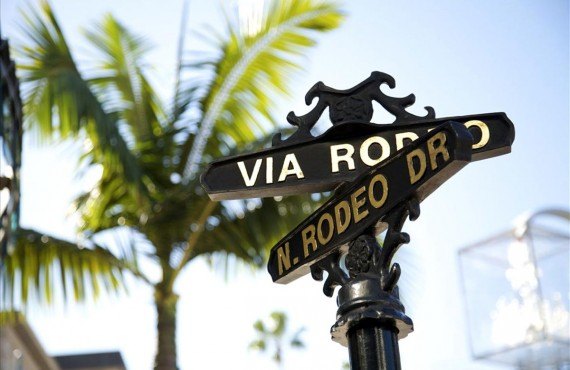 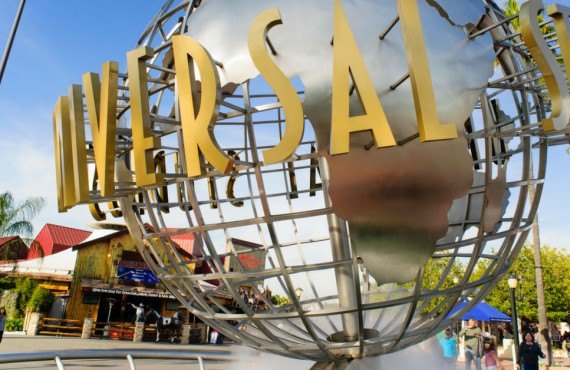 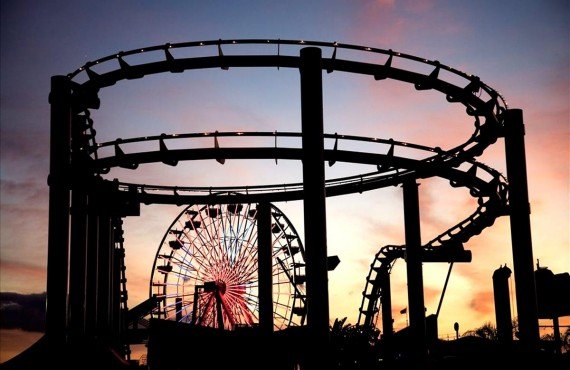 Welcome to the City of Angels: Los Angeles! Few cities can boast of such worldwide recognition that they are referred to only by their initials! L.A. attracts several million visitors a year and is a must on any California itinerary.

Every day someone, somewhere, leaves everything behind to live his or her "American dream": of being discovered and finding fame and fortune. So don't be surprised by the number of would-be celebrities you may see, at any time of the day or night!

In the early 20th century, Broadway was the hub of L.A.'s entertainment scene; with its dozen movie theatres, it had the highest concentration of cinemas in the world. The most famous of these was the Million Dollar Theater, one of the first movie theatres built in the United States, which served as a venue for major movie premieres. It is still in operation today and shows live Spanish theatre.

In the 1920s Broadway was abandoned for Hollywood and the decrepit facades of the buildings can still be seen today.

Grand Central Market first opened in 1917 and has been in continuous operation ever since. A hundred years ago, Broadway was the principal commercial and entertainment corridor of downtown Los Angeles. Bunker Hill, to the west, was covered with stately Victorian mansions, and the area's stylish residents rode down to shop for groceries in the Market's open-air arcade.

Today, Grand Central Market's mission is to celebrate the cuisines and cultures of Los Angeles and to preserve the legacy of a historic downtown landmark. It seeks to showcase California's best ingredients, chefs, and entrepreneurs.

Visitors and locals alike love to relax on the plaza's amphitheater-style terrace which provides plenty of seating. At the bottom of the steps there is a watercourt with fountains and flowery islands. The square is flanked by tall twin towers of glass and steel. Free outdoor concerts are held here.

Pay a visit to Union Station, L.A.'s main railway station, to marvel at its magnificent hall with marble mosaics, its sumptuous chandeliers and its large wood and leather armchairs.

Olvera Street is a historic district considered to be the birthplace of Los Angeles in 1781. Today it is a colorful Mexican marketplace with the feel of "Old Los Angeles": a pedestrian mall lined with street vendors, cafes, restaurants and gift shops. It was revitalized around 1930 to preserve the historic buildings and bring the district back to life. Many of the merchants are descended from the original vendors who opened shops there back in 1930.

Visitors from around the world enjoy wandering around the marketplace smelling the ever-present tacos at the outdoor cafes, listening to the strolling mariachi music, and watching Aztec and Mexican folkloric dancing. The "puestos" (stalls) sell handcrafted goods such as pottery, belts, leather wallets, and Mexican folk art.

When we think of Hollywood, we immediately think of movie pictures and great stars. Nowadays, the neighborhood has lost some of its "glamour" of yesteryear since many movie studios have left for other neighborhoods and many buildings on Hollywood Boulevard have been abandoned and replaced by souvenir shops.

However, there is a move to revitalize the area with the reopening of establishments such as the iconic Chinese Theater and the construction of a major entertainment complex, the Hollywood & Highland Center, which includes shops, a hotel, restaurants and the Dolby Theater (formerly the Kodak Theater), home to the Academy Awards.

Of course, there are still the famous stars embedded in the sidewalks along the Hollywood Walk of Fame and the celebrity handprints and footprints in the concrete of the forecourt of the Chinese Theater. The most interesting section of Hollywood Boulevard is between La Brea Avenue and Vine Street. You can have fun finding the stars of your favorite celebrities.

This legendary cinema destination offers the World Famous Studio Tour , a behind-the-scenes look at sets, special effects, and everything related to moviemaking. A must-see!

Universal has also created a fantastic theme park on the site with rides and attractions that include Fast and Furious - Supercharged, Despicable me, The Wizarding World of Harry Potter, The Simpson Ride, DreamWorks Theatre Featuring Kung Fu Panda and many more. Let yourself be transported into the world of Universal Studios and experience the excitement and magic!

Don't miss Universal CityWalk, an entertainment, dining and retail promenade where you will find great souvenirs. Open every day from 11 am to 9 pm (hours may vary with the season: check the website before you go). We also suggest purchasing your tickets online, which can save you time and money and offer exclusive online benefits.

The Warner Bros. tour begins with a short film that tells the history of the production company before setting out on a guided tour of the studios. Hear anecdotes as you tour sets, backlots and a soundstage, look at real costumes and props, and maybe even witness a film shoot. Fans of Batman and other great superheroes, Harry Potter, or the famous TV show "Friends" won't be disappointed!

You can choose between three types of tours: the Studio Tour (the most popular, lasting 3 hours), the Deluxe Tour (a unique look into the movie-making process , 5 hours) or the "Classics Tour" (focusing on the great classics, lasting 3 hours). Tickets can be purchased directly on the website.

Today Paramount Studios produces television shows 90% the time. This studio tour explores over a century of Hollywood history, with its vast collection of props and set items from past productions and a tour of the backlot with its outdoor sets of big cities that will impress you with their realism.

Enjoy an intimate behind-the-scenes experience in a real working studio, the longest-operating studio in Hollywood. There are two tour options generally available: the Studio Tour, lasting 2 hours, between 9 am and 3 pm every day, and the VIP Tour, lasting 4 1/2 hours, at 9:30 am or 1 pm, weekdays only.

Beverly Hills is the place to see luxury cars and the immense mansions of some of the most popular stars on the planet.

Rodeo Drive is a popular shopping destination known for its high-end luxury boutiques.

If you feel like playing paparazzi, a paparazzi celebrity tour will even help you get to know the underbelly of the profession.

This municipal park is home to the famous giant Hollywood Sign, on the south slope of Mount Lee. A great place to observe the Sign is at the Griffith Observatory, where you can park for free, visit the planetarium, explore the current exhibits and look through telescopes.

Just north of Santa Monica, the Getty Center enjoys an exceptional location amid lush green mountains, at 269 metres above sea level. It is worth a visit for the breathtaking view of the city.

The Getty Center is in fact a cultural complex consisting of four pavilions housing its permanent collections, another for temporary exhibits, and a research institute. Its central garden is a true work of art. Admission is free, but there is a parking fee (about $20 per car).

Note that it is not easily accessible by RV, but you can get there by public transit.

Santa Monica is known as a seaside resort town with its luxury hotels, lively downtown and proximity to the seafront.

The Santa Monica Pier is the end of the legendary Route 66, which connects Chicago to Los Angeles. It is also an iconic structure and the symbol of the city.

Visitors flock here for the amusement park with its classic rides and 1922 carousel, and for the magnificent views of the coast and the town from the end of the pier.

Palisades Park, a long strip of green with public art, a rose garden and plenty of palm trees, stretches along the bluff just north of Santa Monica Pier. At the end of the park, the 189 steps of The Stairs lead up to Adelaide Drive.

Just south of Santa Monica Pier is Santa Monica Muscle Beach, where many people go to be seen and admired, including acrobats and other street performers!

Main Street is one of Santa Monica's main shopping districts, especially between Marine Street and Pico Boulevard. It features picturesque 19th-century buildings and an atmosphere that is at once chic and laid-back.

Unlike Santa Monica, which is a rather posh seaside resort, Venice is very bohemian. For two years, it was a favorite hangout of Jim Morrison and several other stars.

The neighbourhood takes its name from the many canals that were dug here in 1905 to recreate the appearance and feel of Venice, Italy, It was even possible to take an Italian-style gondola ride in what was considered at the time to be an amusement park.

The eccentric Venice boardwalk is a show unto itself. It is frequented by an eclectic mix of musicians and dancers performing for the crowds, fitness buffs working out, shops of all kinds, vendors, tattoo artists, fortune tellers, homeless people, tourists... In short, it's a real circus. Experiencing the effervescence of Venice is a must!

There is even Muscle Beach, which is actually an outdoor training center where people enjoy showing off their muscles.

At La Luz del Dia, the food is abundant and inexpensive. Order a plate of carnitas (pork), which will be served with hand-made tortillas and a friendly smile. You can also try something not often seen on the menu... cactus (nopales)!

Ever wondered what a mix of jungle and a New York industrial loft might look like ? You’ll find your answer at Damian! Nestled in the Los Angeles’ Art District, this upscale Mexican restaurant will not only charm you with its funky theme, but with the creative dishes served and the dedicated staff. Definitely the place to go if you’re looking for something different and memorable!

This downtown microbrewery is an excellent spot for a tasty gourmet meal accompanied by a glass of beer or two. The staff is attentive and the service is good. Sit on the terrace or inside in an attractive decor with a view of the brewing vats.

The perfect place to start the day! The appetizing menu offers several choices for a delicious breakfast. The gigantic pancakes have a very good reputation. It is better to arrive early because the dining room fills up very quickly and the wait can be long.

Open Wednesday-Sunday from 8 am to 3 pm.

One of Hollywood's oldest restaurants, Musso's first opened its doors in 1919. It was a popular hangout for Faulkner and Hemingway during their screenwriting days; other regulars included Orson Welles and Charlie Chaplin. The place is well known for its perfectly seasoned Martinis and Bloody Marys. The menu still offers typical 1920's cuisine with tasty salads, excellent grilled meats (a house specialty) and a wide selection of fish and seafood. Daily specials such as Thursday chicken pot pie.

This superb Santa Monica restaurant inspires all the senses with its chic ambiance, inspired contemporary French cuisine and courteous service. For an unparalleled dining experience, Mélisse is an exquisite culinary destination you will never regret.

Electronic / hip hop music festival. This event is for 18 years and over. Tickets can only be purchased on the official event website.

Come celebrate the 34th edition of the Long Beach Jazz Festival! A great lineup each year showcasing the best artists of the moment, in a magnificent outdoor setting. 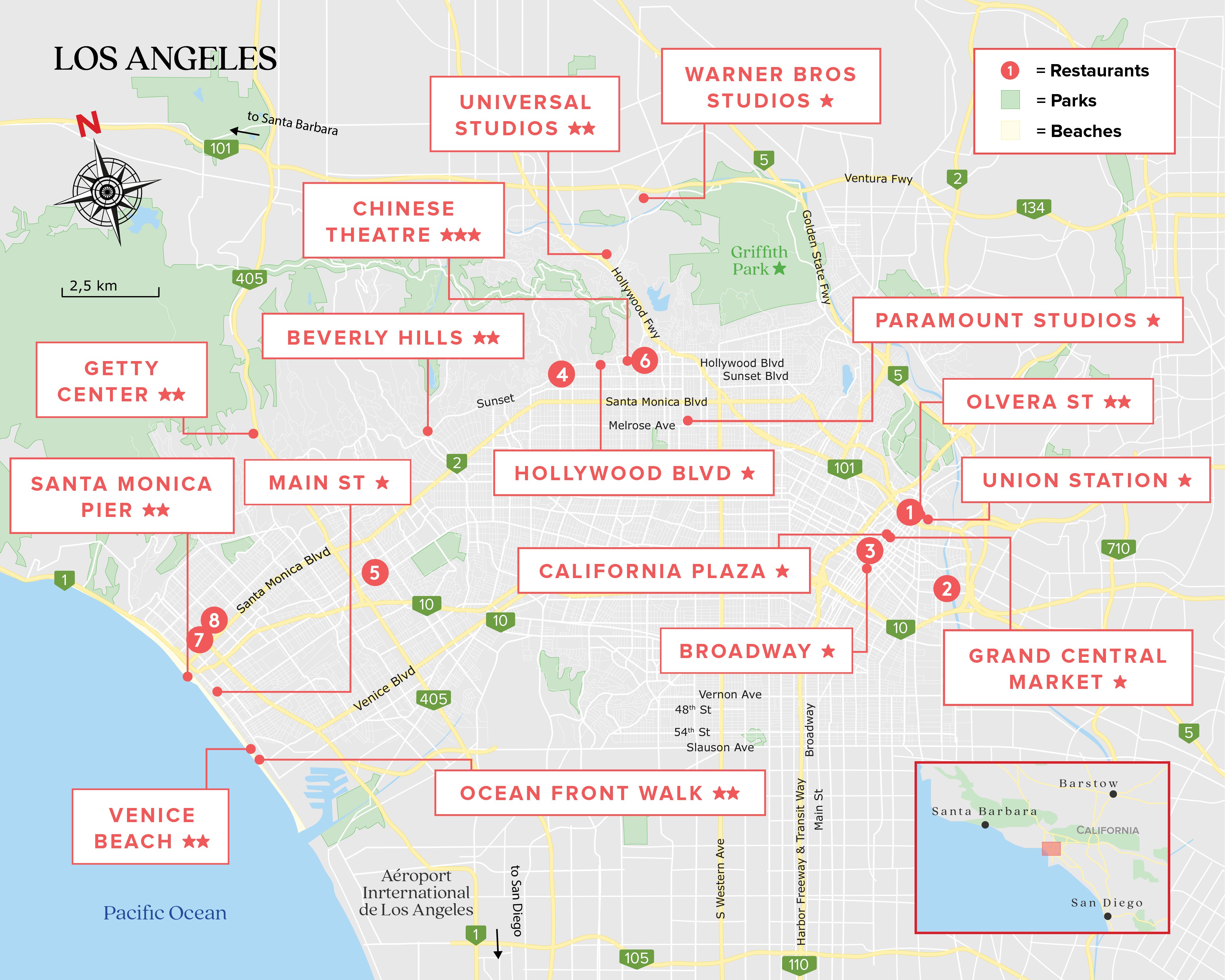 Foggy and crowded city with lots of homeless people.

(Translated by Google) for a few days near the airport, well soundproofed 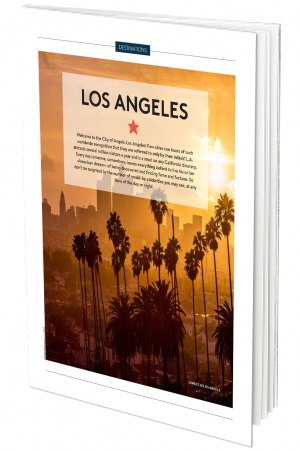 Highway 1 between Los Angeles and San Francisco: The complete guide