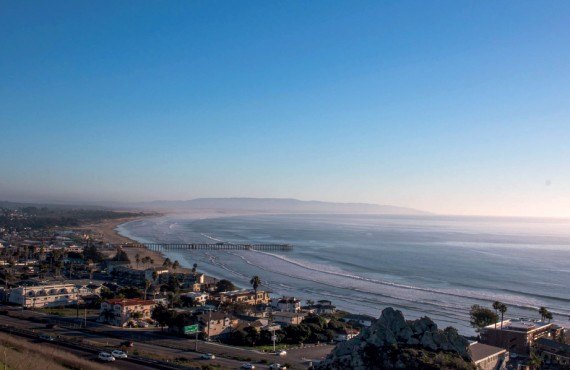 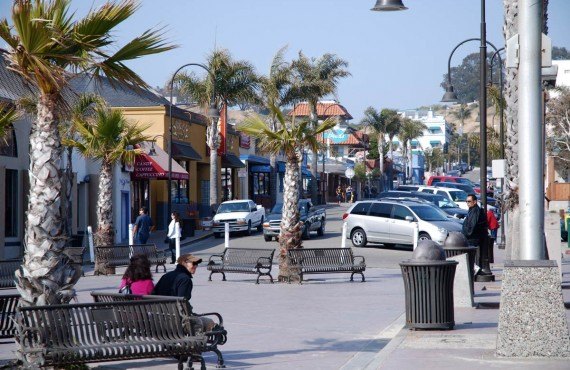 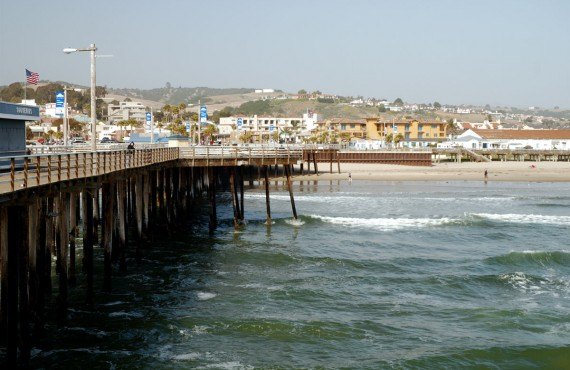 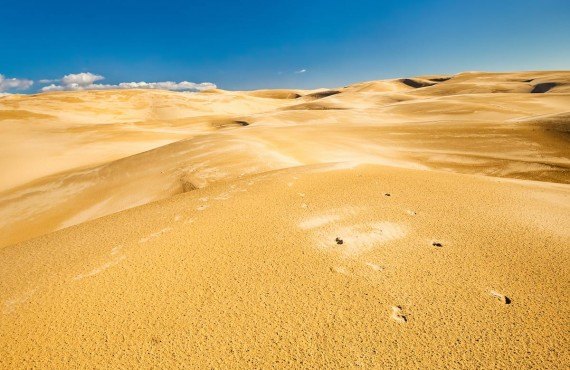 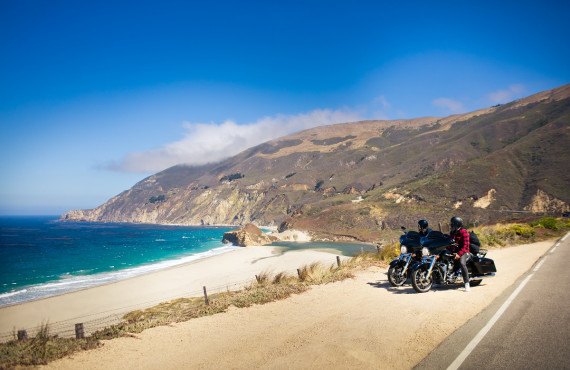 The California coast that stretches between Los Angeles and San Francisco is one of the wildest and most beautiful areas in California.

The part between Monterey and Morro Bay is absolutely gorgeous.

About 5 km south of Pismo Beach, along the coast, you will discover this huge area of dunes in the town of Oceano.

It is recognized by scientists, environmentalists and visitors as the most beautiful and the largest area of coastal dunes remaining in California.

Open from 7 a.m. to an hour after sunset.

Take a stroll through the streets of the city and finish your walk along the beach, on the pier.

If the weather is right, you will be treated to a beautiful sunset to end the day on a high note!

If you want to shop for great American or international brands at very attractive prices, the Pismo Beach Outlets is a must for you.

This incredible castle was built between 1919 and 1947 to house the vast collection of art and antiques of publishing magnate William Randolph Hearst. It is located on a hilltop and offers an exceptional view of San Simeon and the surrounding area.

The castle had  56 bedrooms and 61 bathrooms, a central kitchen, 19 living rooms, a library, 51 hectares of gardens, outdoor and indoor swimming pools, a movie theatre, tennis courts, the largest private zoo in the world, and even an airfield.

It was almost a hill town unto itself! After Hearst's death in 1951, the castle became uninhabited and was given to the State of California, which turned it into a museum. Today it is a State Historical Monument and National Historic Landmark and is open to the public.

Several guided tours are offered, and a 40-minute film on the castle's history is shown at the Hearst Castle Theater. Reservations are highly recommended. Dining options available on site.

Located about 7 kilometres north of San Simeon and the road to Hearst Castle, Elephant Seal Vista Point is one of the best spots in California to watch elephant seals. Hunted almost to extinction for their oil-rich blubber, they are now protected by the Marine Mammal Protection Act.

Their rookery grows from year to year and currently stretches for about 10 km along the shore around Point Piedras Blancas, north of San Simeon. They come ashore for a few months each year to molt, give birth and mate. They spend the rest of the year out at sea, swimming thousands of kilometres from the coast and diving to depths of up to 5800 feet in search of food.

The best time to observe the seals is from December to March. The observation areas are open every day of the year and access is free. There is a large parking lot on site that can accommodate RVs.

If you only drive one scenic route in California, it should be Highway 1, especially the stretch between Carmel (to the north) and San Simeon (to the south), which is widely considered to be one of the most scenic driving routes in the United States, if not the world. For the most spectacular views, we strongly suggest going in the afternoon, as the coastline is often cloaked in fog in the morning (especially from June to August).

You're in for an exciting ride along Highway 1, with its dizzying mountains, rugged terrain, coastal landscapes, coves and stunning beaches.

Here are the Top 3 must-see stops along this section of Highway 1:

Located just 4 miles south of Carmel, Point Lobos State Reserve is an area of headlands, coves and rolling meadows. The offshore area forms one of the richest underwater habitats in the world and is very popular with divers.

Wildlife includes seals, sea lions and sea otters and migrating gray whales (from December to May). Thousands of seabirds also make the Reserve their home.

Hiking trails follow the shoreline and lead to hidden coves, such as Bird Island Trail and Sea Lion Point Trail which provides views of sea lions.

At Whalers Cove, which used to be a whaling station, a small cabin built by Chinese fishermen at the turn of the century still remains and is now a cultural history museum.

Big Sur Village is even quieter than Carmel and has a population of only 2,000. Intrepid surfers like to brave the impressive waves crashing on its rocks. Being at the foot of a mountain, access to the village is occasionally blocked by the closure of Highway 1 due to a landslide.

Once you get there, you must stop at the legendary Nepenthe Cafe (48510, Highway 1, Big Sur). In operation since 1949, it is perched on a cliffside overlooking the coast, allowing you to take in breathtaking scenery while enjoying a delicious meal.

This magnificent beach is off the beaten path in the heart of Big Sur and a favourite with the locals. It can be hard for tourists to find as there is no road sign indicating its presence. From Highway 1, near Pfeiffer Big Sur State Park, turn onto Sycamore Canyon Road, which is unmarked but has a small yellow sign indicating "Narrow Road" and "No RVs - Trailers".

Don't miss this beautiful beach with its breathtaking ocean scenery, dramatic outcroppings of rocks, intense waves (be careful, there can be a dangerous undertow), and purple-tinged sand coloured by the presence of manganese garnet.

The beach is generally open ½ hour before sunrise and until ½ hour after sunset (unless it is closed because of bad weather). There is an entrance fee of $10/car.

Splash Café near Pismo Beach Pier is famous for its award-winning clam chowder. In fact, it serves more than 30,000 gallons of clam chowder every year! It is also one of the longest standing Pismo Beach restaurants and one of the busiest restaurants on the coast since 1989. Splash Café serves breakfast, lunch and dinner and the menu features staples such as soups, chilis, tacos, sandwiches, burgers and salads. If you want to enjoy the sunshine, order your meal to go and have a picnic on the Pier!

In summer, the restaurant is usually open daily from 8 a.m. to 9 p.m. Also open in low season with a more restricted schedule.

If you're in the mood for great seafood in an ultra-relaxed atmosphere, the Cracked Crab is the place to go. The restaurant's concept is simple: a bucket filled with a selection of shellfish steamed with spicy Cajun sausage, red potatoes and corncobs is dumped on your table. This is accompanied with melted butter, homemade spicy cocktail sauce, homemade triple mustard sauce, warm sourdough rolls, and the tools you need to get down to business. If you're not into seafood, there are always steak, chicken and vegetarian dishes. Note that the restaurant does not take reservations, so arrive early!

This exceptional restaurant offers spectacular Pacific Ocean views and superb coastal fusion cuisine. The upscale menu is based on a blend of South American and Mexican flavors, with a touch of California and the Mediterranean. Appetizers include soups, chicken wings with Chipotle, and tacos on fresh homemade tortillas. For the evening main course (served with beans and poblano rice), try the Chimichurri steak or pork chop with fresh pineapple salsa. And for dessert, you could choose the chocolate fondue with churros and fruit, or plantains sautéed with rum for exemple.. A pure delight! 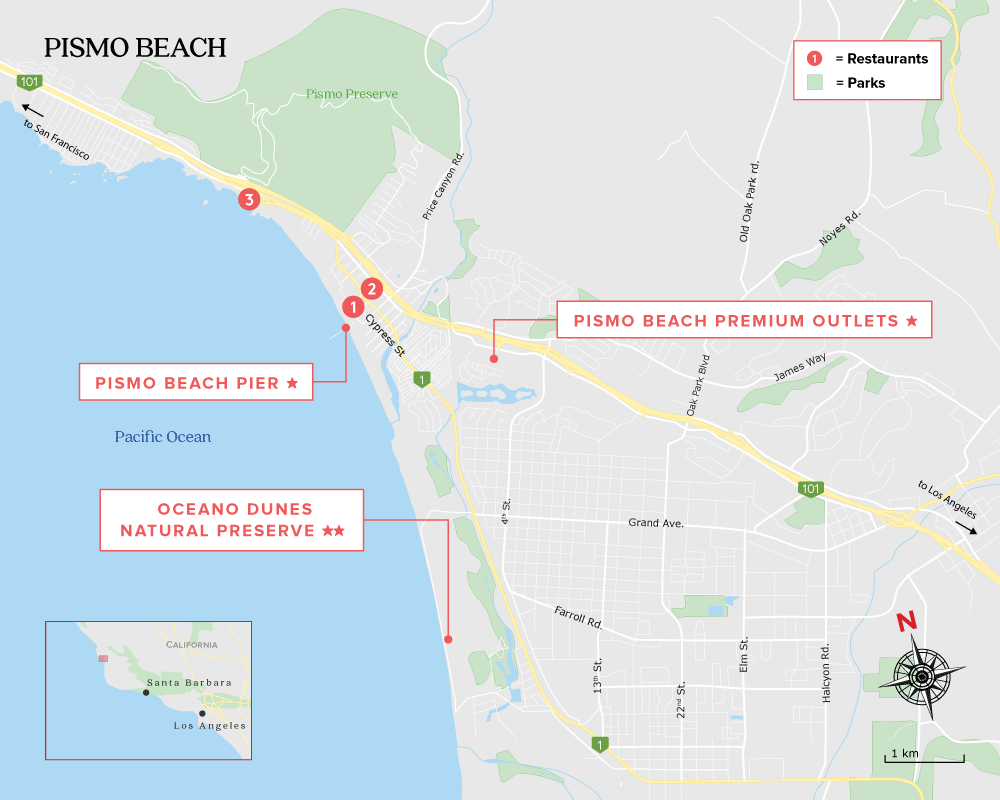 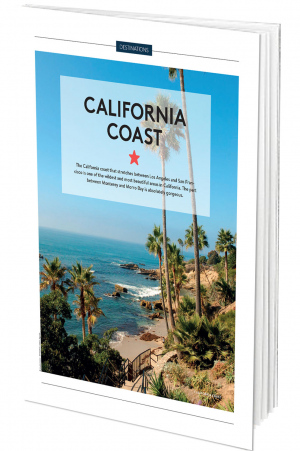