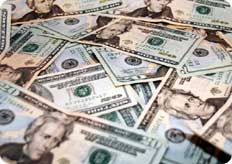 The most popular credit cards are accepted everywhere, including Visa, MasterCard and American Express. Traveller's cheques are generally honoured at major hotels, some restaurants and department stores. Otherwise, they must be cashed at an exchange office or bank.

Where can I change my money?

There are many exchange offices in major cities in the United States. Airports also offer currency exchange services.

Banks are generally open from 9 a.m. to 4 p.m., Monday through Friday. Most ABMs (connected to the Cirrus, System Plus or Interac networks) allow you to withdraw cash at any time, seven days a week.

If you wish to arrive in the United States with U.S. cash on hand, you should choose different denominations. For example, $20 bills will be useful for dining out or cab fares, while $1 bills will be useful when passing through toll booths on the various U.S. highways.