Mesa Verde, a UNESCO World Heritage site, is a park unlike any other, in which cave dwellings and archaeological sites abound amongst canyons and lush forest.

With its must-see points of interest and practical information, this complete guide will be your best ally on your next visit.

It's time for a journey back in time and full of mystery to some of the most beautiful archaeological remains that you will discover during your trip to the US.

Located in southwestern Colorado, Mesa Verde houses more than 5,000 archaeological sites including several cave dwelling villages, which were inhabited in the early 600s by the Anasazi (Ancestral Puebloan) people.

This forgotten park of the American West is traversed by a scenic road that splits at Far View, dividing the park into two sections:

Chapin Mesa: open year-round, this is the most visited area.

Wetherill Mesa: less visited, open from mid-May to mid-October. The 20-km Wetherill Mesa Road is steep and winding and prohibited to vehicles over 25 feet long.

Best of the West 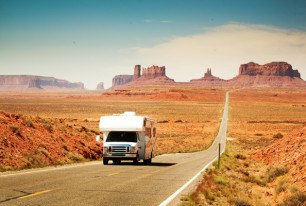 What to do in Mesa Verde

Beginning your visit with a stop at the Visitor Center, at the park entrance, is a must.

You will be greeted by park rangers, who will help you plan your visit and explain the layout of the park. This is also where you can purchase tickets for guided tours of Cliff Palace, Balcony House and Long House.

The museum is also worth a visit.

The exhibits and a 25-minute orientation film will teach you all about the lives and culture of the Ancestral Puebloan people.

Unfortunately, it is not possible to walk on the site because of falling rocks, but you can get close to it by taking an easy path from the museum.

What is a kiva? Kivas were round underground rooms accessed from the roof by means of a ladder. They were used for religious ceremonies and as a gathering place for activities such as weaving.

This incredible dwelling, perched on the edge of the canyon, contained 150 rooms and 23 kivas, and had a population of approximately 100 people.

It is the largest cliff dwelling in the park, and really feels like a village.

Cliff Palace is often featured in the most famous photos of the national park, a perfect illustration of the park's greenery and famous cliff structures.

With its tunnel, steep passageways and 10-metre entrance ladder, Balcony House is the most adventurous tour in the park.

But if you're fit and not afraid of heights, don't hesitate for a second.

It's a simply magnificent site.

This moderate 3.7 km loop hike begins next to the museum.

The trail offers a gorgeous view of Spruce Canyon and Navajo Canyon and leads past a large petroglyph panel.

Some sections are quite steep, so be careful if you're hiking with young children.

There are many ruins and archaeological sites along the way. Highlights include Square Tower House and the view of Cliff Palace from Sun Point View.

Smaller, but similar in appearance to the other dwellings, Step House is located in a large alcove on the eastern side of the plateau.

It is open for self-guided tours and is reached by a short trail. There is always a ranger on duty to answer your questions.

Long House is the second-largest dwelling in the park.

The guided tour lasts 2 hours and includes a 3.6 km round-trip hike, and climbing two 4.5-m ladders inside the site.

This tour is quite physical due to the heat, the altitude, and the level of difficulty of the trail.

Where to eat in Mesa Verde

This is a great place for an inexpensive lunch. You will find Southwest specialties including their popular Navajo tacos. Open year-round, 7 days a week.

A cafe with a lovely view and a varied menu, near Far View Lodge. Open May-September.

Contemporary restaurant offering quality food, impeccable service and a superb view of the park (try to get a table near the window). Open from mid-April until late October. Reservations are strongly recommended.

Where to sleep in Mesa Verde

Fait View Lodge enjoys a peaceful location in the heart of nature, and is the only accommodation inside the park. All guest rooms have a balcony with a great view... but no television!

Comfortable camping in a glorious canyon setting, just 6 km from the park entrance. The campground has all the amenities: laundromat, gas station, gift shop... Foodies will appreciate the all-you-can-eat pancake breakfast in the village restaurant.

Keep an eye out: it's not unusual to see deer and wild turkeys!

The park is open year-round but, as mentioned above, Wetherill Mesa sector is not accessible from mid-October to mid-May.

There are a few trails for snowshoeing, cross-country skiing and walking: when the park dons its winter white, it is simply sublime!

Valid for 7 days, the park entry fee is $25 per vehicle (including occupants) in high season, and $20 in low season.

If you plan to visit more than 2 or 3 parks during your trip, the most economical option is to purchase the "America the Beautiful Pass" for $80, which is valid for 1 year.

And there you go!

Don't hesitate to share your experiences or ask questions in the comments section below.

Your e-mail address will not be shared

What should you pack for a trip to the US?