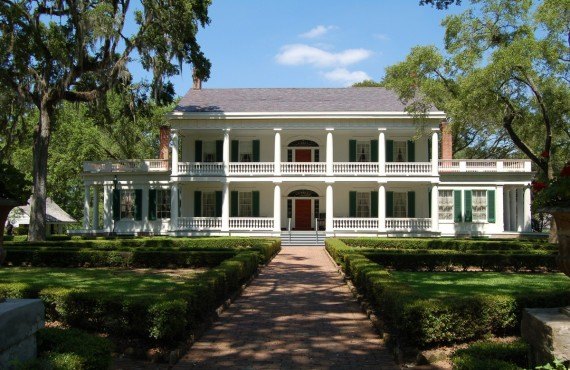 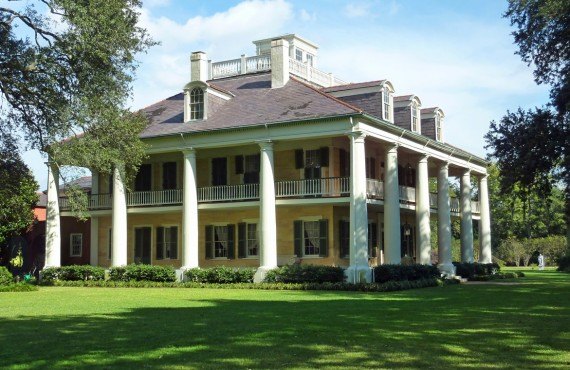 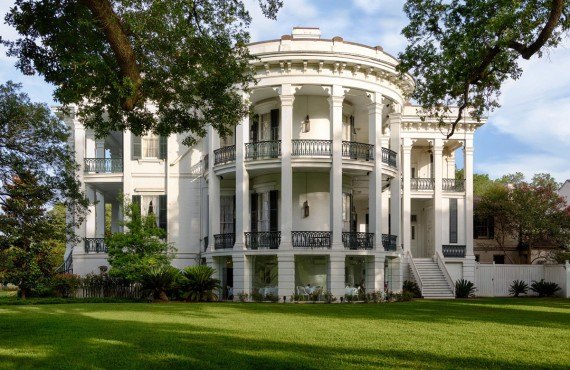 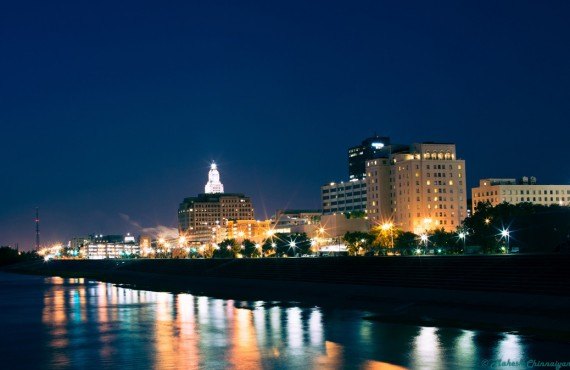 Founded in 1809, St. Francisville was called "the town two miles long and two yards wide" because it was developed atop a narrow ridge overlooking the Mississippi River. It was the commercial and cultural center of the surrounding plantation country.

Today it is a popular tourist destination known for its historic plantations and its charming downtown. You will appreciate the quiet, rural atmosphere of this picturesque area.

Take the opportunity to discover Louisiana's unique Cajan culture, far from the hustle and bustle of New Orleans and Baton Rouge.

Built in 1835, the main house at Rosedown Plantation is considered one of the most beautiful homes in Louisiana. Its owners, the Turnbull family, made their fortune in the cotton industry. The 1860 census indicated that 145 slaves were living in 25 houses… What distinguishes Rosedown from other plantations are its pleasure gardens, notable for their size and sophistication, which cover more than 10 hectares. Rosedown is a laboratory for the study of the cultural traditions of slavery, the lifestyle of the gentry, and scientific experiments in agriculture and horticulture.

The Myrtles has long attracted curious visitors from around the world! At first glance, the house with its large veranda and magnificent gardens will envelope you in a sense of peace and tranquility. Yet, the place is reputed to be haunted! This historic home, dating from 1796, is said to have been the scene of frightening and mysterious happenings. Maybe you will see Chloe's ghost... It is possible to tour the house and even spend the night.

The doors open every day from 9 a.m. to 4:30 p.m. There are guided tours that focus on the history, mystery and intrigue of the plantation and last about 45 minutes. Evening tours are also available from Wednesday to Saturday with a reservation.
7747 Highway 61, St. Francisville

Oakley Plantation is located in Audubon Memorial State Park. Renowned naturalist and artist John James Audubon arrived at the plantation in the summer of 1821 to teach drawing to the daughter of the house and to paint. Audubon's stay at Oakley lasted only four months, but he painted 32 of his famous bird pictures here. His major work, The Birds of America, is often hailed as the most beautiful book on ornithology ever printed. The large house in which he stayed is a good example of colonial architecture of the period. The site includes an interpretation centre, the gardens, slave cabins, the barn and the plantation kitchen.

The park is open daily from 9 a.m. to 5 p.m. and guided tours of the house are usually offered every day.

Between New Orleans and Baton Rouge stretches the legendary Plantation Road , also known as Great River Road. It runs for about 150 km along the Mississippi River and features many great mansions and memorable plantations.

As you visit the mansions of wealthy 19th century sugar and cotton planters, you will learn a great deal about the history of Louisiana and about slavery, which for too long was central to the economic development of this American region.

Since it takes about 90 minutes to visit one of these estates, you certainly won't be able to see them all. To help you choose, here are our personal favourites.

We recommend that you take at least one guided tour. Naturally, you can stop as often as you like to stretch your legs, admire the great houses and their gardens, and reflect on the history to which they bear witness...

Discover the compelling story of 4 generations of Creole women, both free and enslaved. In 1804, Guillaume Duparc, a French naval veteran, acquired the sugarcane plantation and began construction of his manor house. The brightly-coloured house was built by Duparc's slaves. Following his death, the plantation was run by the women of the Duparc and Locoul families for almost 84 years, until Laura Locoul sold it to the Waguespack family in 1891. The estate includes 12 period buildings, including the original slave cabins.

Oak Alley Plantation was named for the majestic avenue of 300-year-old live oaks at the entrance to the estate. While it is a site of great beauty, the sugar plantation long served as a place of enslavement. In fact, the site houses a moving slavery exhibit. The historic site also features several buildings including the Big House, built in 1839 and restored in 1925, the blacksmith shop and the slave cabins. Take the time to try a Mint Julep, a drink that the owners' wives used to enjoy in the morning after coffee. There is also a lovely gift shop where you can buy souvenirs and local items.

Houmas House is named for the Houmas Indians, who were given a land grant to occupy the fertile plain between the Mississippi and Lake Maurepas to the north. The plantation was established in 1774 when the Houmas sold the land to Maurice Conway and Alexander Latil. The main house, completed in 1840, is impressive with its great columns and magnificent veranda. The mansion underwent construction and remodeling by various owners over the years. When it was restored, the best features from various periods were selected to showcase a legacy of each family in the mansion. Kevin Kelly, a New Orleans businessman, purchased the estate in 2003 and still owns it today. The site also has a gift shop and 3 restaurants.

Other interesting plantations along Plantation Road include:

The capital of Louisiana is well worth a visit. The city got its name from a cypress pole used to mark the boundary of two tribal hunting grounds, which was stained red from the carcasses of animals that had been hung there to dry.

The building of a new statehouse was commissioned in 1928 by Huey Pierce Long when he was running for Governor of the State of Louisiana. The 34-story Art deco style skyscraper is the tallest capitol building in the country. Its 27th floor observation deck offers magnificent views of the Mississippi River and the Pentagon Barracks built in 1819 to house American Army troops. The base of the building contains Memorial Hall and the House and Senate chambers. The Old Arsenal Museum, which presents the site's military history, is located on the Capitol grounds.

The former capitol building was inaugurated in 1850.This National Historic Landmark looks like a medieval castle and now houses a museum whose mission is to educate the public about Louisiana's rich history and the democratic process.

Capitol Park Museum is a branch of the Louisiana State Museum. Through themed exhibits on diverse aspects of Louisiana's history, industry and culture, you will discover the soul and traditions of the region. The museum houses many fascinating objects including a 48-foot wooden shrimp trawler, a sugar cane harvester, a scale model of a drilling rig, a Civil War submarine and artifacts from steamboats. You will also see exhibits on slave markets, resistance and revolt and on music and famous Louisiana musicians such as Louis Armstrong.

Magnolia Mound Plantation sits in the middle of a park planted with magnolia trees. This Creole-style house built in 1791 is made entirely of wood and rests on stilts to allow the river breeze to circulate and to protect it from the Mississippi floods. Unlike most of the region's grand plantations, the house has a more modest interior with a rustic feel. The property also features other buildings including slave cabins. To add to the authentic feel, traditional cooking demonstrations are sometimes held in the old open-hearth kitchen.

St. Francisville offers a limited selection of restaurants, but the Francis is another good option for tasty American fare in a pleasant setting. The menu features typical Louisiana food and hamburgers. It's a friendly place with quick service and a large patio. Live bands sometimes play on Friday and Saturday nights, otherwise there are giant screens showing sports.

This recently opened restaurant is located at The Myrtles Plantation. The cuisine is excellent and prepared using local, market fresh produce with a menu that changes with the seasons. The large wood-fired hearth is also used for cooking certain dishes. In addition to the restaurant, you can learn about the history of the plantation.

The popularity of this Baton Rouge restaurant can be attributed to the delicious Louisiana favourites it serves. The menu showcases fresh seafood straight from the Gulf, but also includes steaks and a children's menu. You won't be disappointed with the service.

Parrain's Seafood in Baton Rouge opened its doors in 2001 and has been much appreciated by its loyal customers ever since. It is a local favourite for seafood. There are daily specials for lunch and dinner and a delicious brunch on Sundays. You will also enjoy the atmosphere and the service. 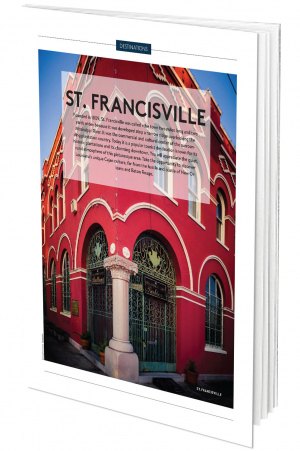